A Classical Masterpiece from an Art Deco Master 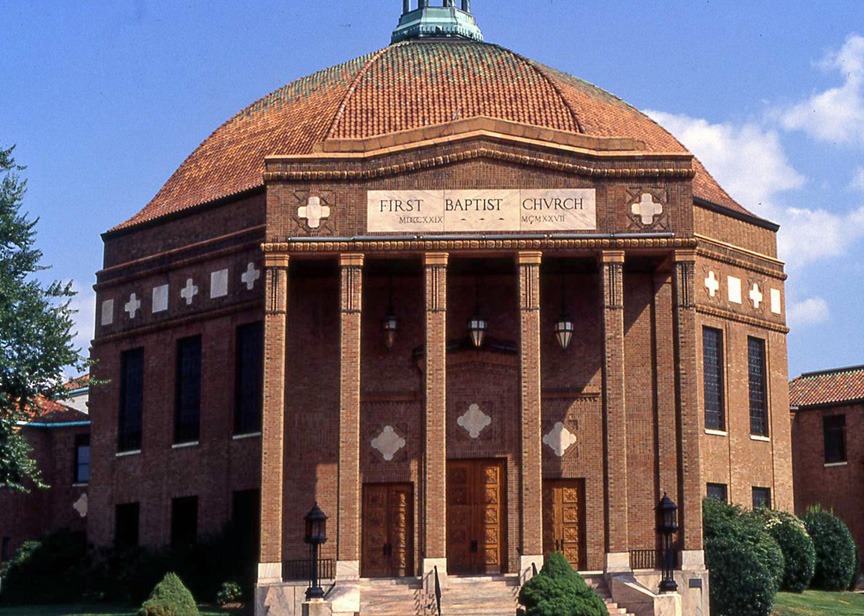 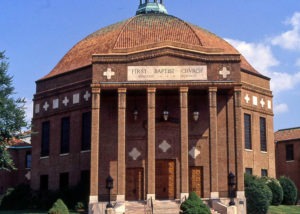 “What is that?” was my initial reaction to seeing First Baptist Church of Asheville for the first time, in 1993. But now after years of observing it both from its exterior, and attending numerous worship services and events where I have observed its interior design, I’ve come to see it as a Classical masterpiece from an Art Deco Master.  Its architect, Douglas Ellington, though initially receiving his architectural training at Drexel University in Pennsylvania, was trained in the Beaux Arts style at the École des Beaux-Arts in Paris.  The École trained architects in Classical art and architecture modeled on the classical “antiquities”, with the goal of preserving these idealized forms and principles and passing them on to future generations.

In his book, Classical Architecture: Rule & Invention, architect, author and educator Thomas Gordon Smith postulates that the principles of Classical architecture are applicable for all generations, and that all classically designed buildings are “products of both canonical rule and invention.”[1] Smith further argues that applying Classical principles to the design of a building, is not “reverential plagiarism”, but “means following a difficult course between respecting the rule and authority of the canonical model and responding to the functions, themes, and technology of our times.”[2]  We see in the design of First Baptist Church that Ellington has masterfully and successfully accomplished this very thing. 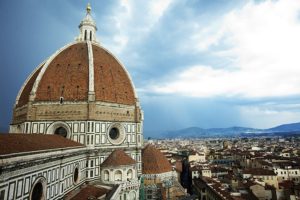 Perhaps First Baptist’s most striking, and certainly its most noticeable, feature is its central tiled domed roof.  The dome’s unique shape and use of clay tiles for it roofing is derived from classical Renaissance antecedents, specifically from Brunelleschi’s famed Duomo di Firenze in Florence, Italy. The Duomo dome consisted of two self-supporting masonry domes, an outer and an inner, with a space in between that is fully accessible to its peak. The First Baptist dome, constructed of steel ribs, utilizes a similar concept[3]-an example of Ellington exercising “Classical rule & invention”.

Another striking feature at First Baptist is its two-story columned entrance portico. Nothing can be more “classical”, then a columned temple-front portico. However, in the case of First Baptist, Ellington stylized the columns using Art Deco sensibilities-but yet they are still classical columns with the obligatory base, shaft, and capital.   The six chamfered columns have plain marble bases, with brick shafts and “stylized capitals composed of brick elements set in a double row sawtooth pattern under a molded terracotta cap.”[4] The unusual entablature above the columns utilizes “an architrave and cornice of alternating terracotta inserts of nail heads and palm leaves”.[5] The oversized frieze, between the architrave and cornice, includes a central marble panel engraved with the church’s name (in Roman lettering).  The center panel is flanked on both sides by marble Greek crosses (which reminds one of the modern Red Cross symbol) inserted into the brick.  Ellington used a gabled (slightly) brick cornice in place of the usual gabled pediment typically found on a classical portico. 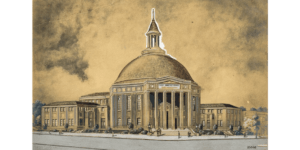 An early rendering of First Baptist shows even more of Ellington’s attempt to blend the Classical Renaissance architecture with the modern-day Art Deco. The original scheme called for polychromatic masonry with two-story paired fluted pilasters on the corners and between the windows of both the sanctuary section and the adjacent wings. The spandrels between the windows were to be layered recessed panels, a prevalent Art Deco motif.

What strikes me about First Baptist, and I’ve not seen any written references to this, is how much of its design reminds me more of, not the Duomo, but the earlier (constructed between 1059 and 1128) Baptistery of San Giovanni (Battistero), an octagonal building in front of the Duomo.  The way that the dome of First Baptist sits on a secondary cornice above a plain octagonal drum, without the corner rib/buttresses, is much more like the Baptistery of San Giovanni than the Duomo.  Even the lantern/steeple of First Baptist more closely resembles the lantern on the Baptistery, than the one on the Duomo.  Also, earlier preliminary drawings for First Baptist show a pyramidal roof over the sanctuary rather than the curved Duomo-style dome that was actually used. 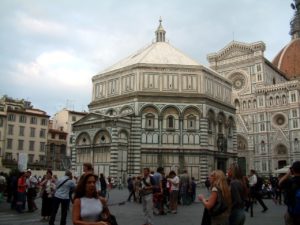 “Many of the decorative details” on the interior of the church, says the church’s website, “represent ecclesiastical images and forms found in nature. One example, an abstracted palm leaf, which occurs on much of the interior and on all the original sanctuary furnishings, which were also designed by the architect. The palm leaf among other details brings out Ellington’s sensitivity to the natural environment and enriches the building’s overall character.”[6] 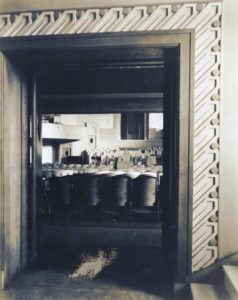 Although, it makes sense that Ellington would use an “abstracted palm leaf” for a motif, since palm leaves, also called anthemion by the Greeks, are a prevalent motif in classical architecture, I think that the motifs at First Baptist are meant to represent abstracted feathers (see adjacent photo of a sanctuary doorframe).  Ellington used a very similar motif on his next commission, the 1927 Asheville City Hall, and in the Dedication Ceremony brochure for the City Hall from 1928, it states, “The prevailing ornament, which may be described as a feather motif, was devised as being lightly reminiscent of the Indian epoch”.[7] Using Thomas Gordon Smith’s postulate of “rule & Invention”, Ellington invented a feather motif in place of the usual palm leaf. It reminds me of earlier uses of American vegetation on classically designed buildings, such as Benjamin Henry Latrobe’s design for the U. S. Capitol where he used corncob capitals on his columns for a first-floor vestibule and tobacco-leaf capitals for columns in the small Senate rotunda. 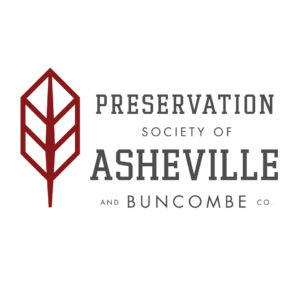 Ellington’s stylized feather motif has been the inspiration for the new logo of the Preservation Society. This seems appropriate as Ellington’s buildings form the core of Asheville’s historic Civic and Public architectural landmarks.

First Baptist Church’s unique design by Douglas Ellington is a product of an architect seeking to apply Classical Architecture forms and principles, while making the design relevant to his generation.