It must have been a particularly cold February in Asheville; the kind we rarely have anymore. It was 1977 and the small jewel of Kenilworth Lake had frozen solid. A single engine Piper PA 12 Super Cruiser flew south and east of downtown Asheville when suddenly, the plane’s engine began to labor.

Imagine the view a small plane pilot would have had back then. It was “stick season” – the emerald green lushness of the trees had long since given way to clearer, crisper vistas. The city of Asheville, devoid of leaves and covered with a fine coating of snow and ice spread out below, the landmasses intermixed with small gems of lakes: Beaver, Kenilworth, Biltmore. 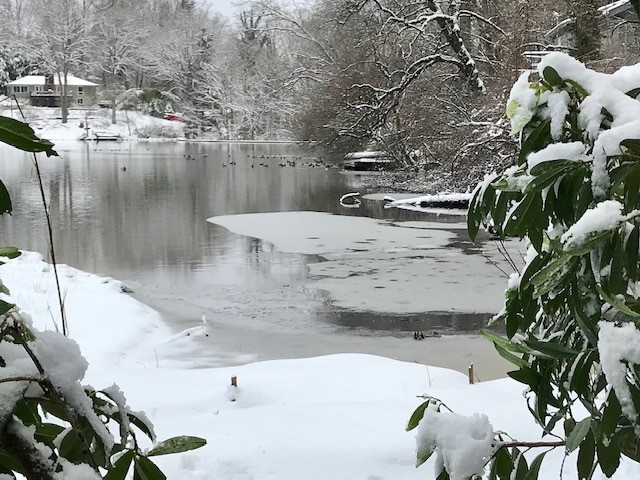 Winter ground view of Kenilworth Lake looking north from the east side of the dam. 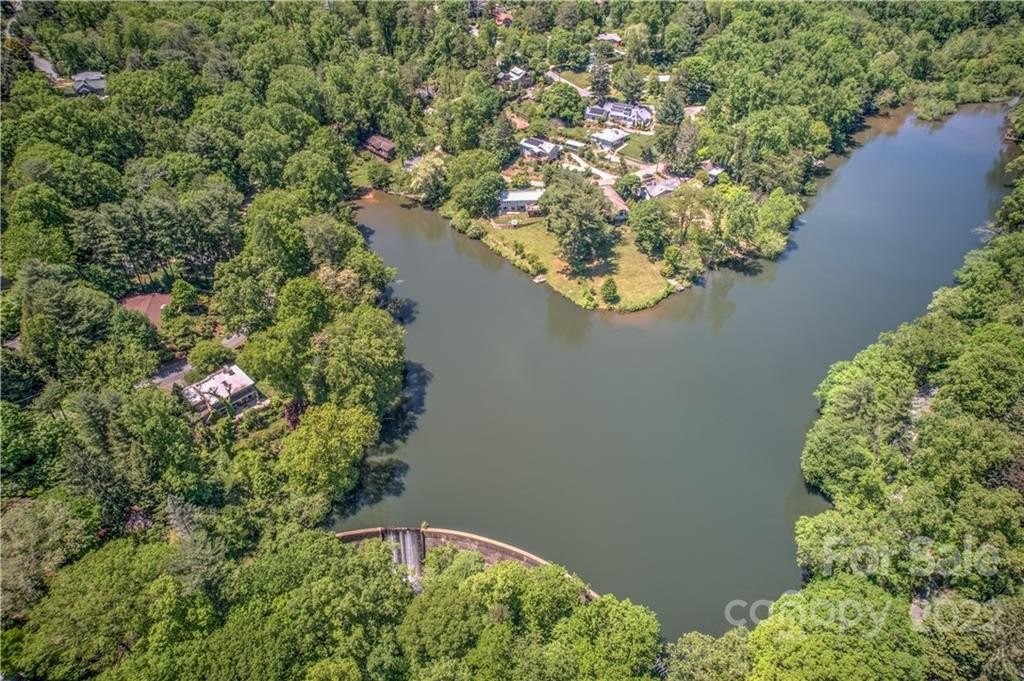 Summertime view of Kenilworth Lake from south to north.
Note the dam in the lower middle area.

As the plane’s engine began to sputter and malfunction, the quick thinking pilot had no choice but to find an immediate landing place. He spotted a white expanse of icy smoothness below, surrounded by steep banks of heavily forested residences. He was in luck; Kenilworth Lake had frozen and become a last resort landing strip.

The pilot probably saw the beautifully curved dam at the lake’s southern end. It must have been a tricky and nerve racking landing, since south, below the dam, the land drops off precipitously into heavily forested, uneven terrain. Nerves of steel and quick firing neurons guided the pilot to aim for Kenilworth Lake’s middle while pointing north.

According to a brief mention in the Asheville Citizen Times of February 2007, the small plane’s landing was a success. It skidded to the northern end of the lake and into Kenilworth and Kenilworth Forest neighborhood lore. 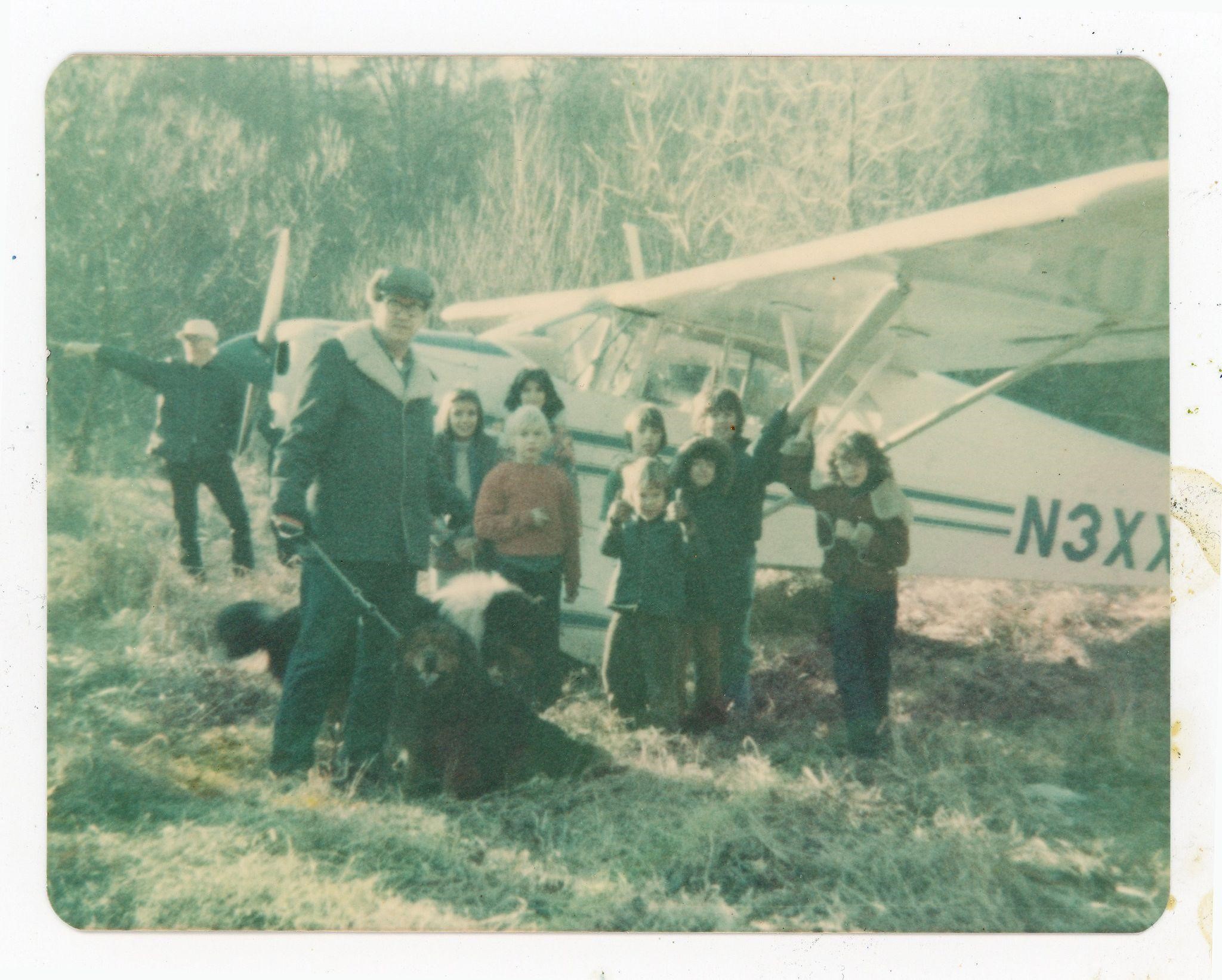 Sally Martin took this photo showing her husband, dogs and three children (front right) along with other neighborhood kids. The man to the left may be the pilot; the NTSB has no record of the emergency landing.

Not only was the pilot lucky to have skillfully landed on the rarely frozen lake – he was lucky the lake existed at all. If long ago plans had gone differently, he might have landed on a golf course or crashed into a development.

It’s difficult to imagine how different Asheville looked in the early 1920’s. A brief visual history helps set the stage for the changing landscape. 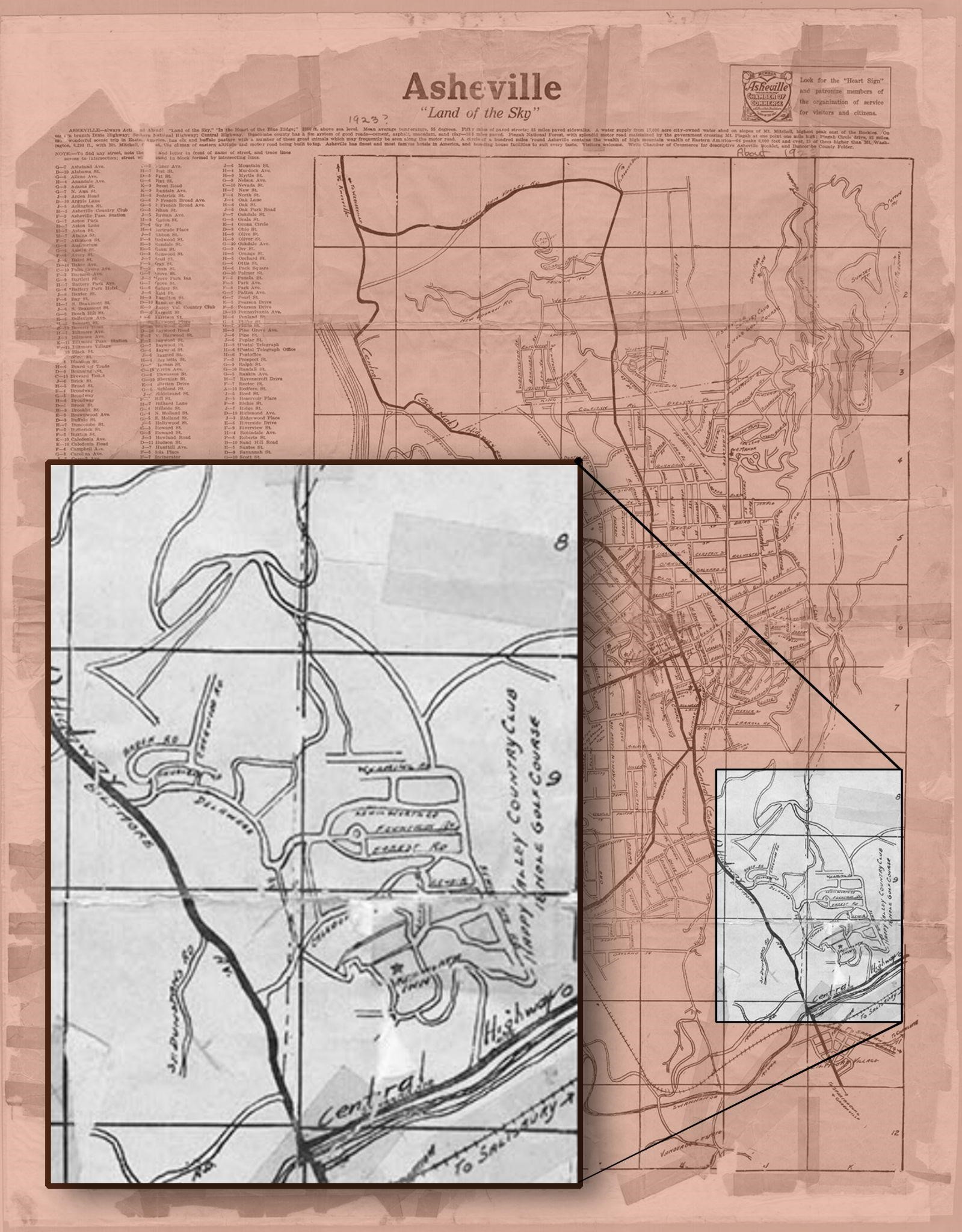 The 1918 map, above, entitled “Asheville, Land of the Sky” shows the general Asheville area and, on the lower right (K – 9) shows a small area designated as “Happy Valley Country Club” off Kenilworth Road. The enlargement shows the orientation and scope of a proposed future golf course. A group of stockholders purchased the lands from Dr. Henry Briggs in 1917 with the intention of creating a golf course.

The course was the idea of the Kenilworth community builder, James Madison Chiles, who in the 1910’s and ‘20s modeled Kenilworth after Kenilworth Castle, Sir Walter Scott’s inspirational setting in central England.

The land that Briggs sold to the Club was a portion of the original estate of Edwin Pascal Davis, which he had purchased from the Davis heirs in 1910. Briggs’ deed of 1917 was in conjunction with a “deed of trust”, from Wachovia Bank, stipulating that the remainder of the money for the golf course property must be raised and paid to Briggs by October 1917. Happy Valley Country Club was not able to raise the additional funds to pay for the land and thus defaulted on the loan. This was the middle of World War I and a difficult time to be raising money for such leisurely pursuits.

In September of 1918 the property was sold on the steps of the Courthouse with the highest bidder being Dr. Briggs. In 1925 Briggs sold the same property, along with the old Erwin Patton farm to the newly formed Kenilworth Lake Company.

And so it began: the planning and development of Kenilworth Lake. The construction was estimated to cost $100,000 for a steel-reinforced concrete dam able to hold back a 44 acre lake, 75 feet deep.  The final concrete dam was finished in 1925 at a cost of $108,000. Dr. H. H. Briggs was a chief investor. James (Jake) Chiles died June 1, 1925 at the height of the activity. 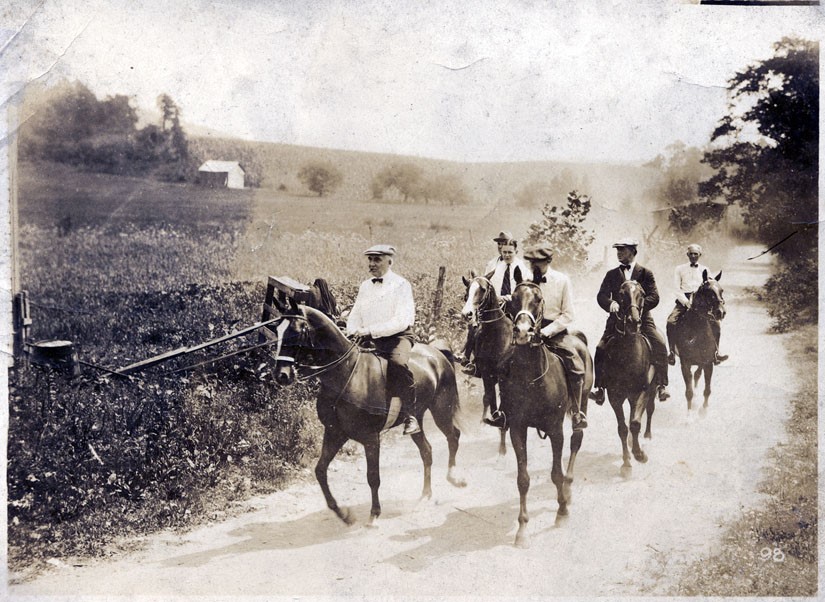 The above photo shows five men, including Jake Chiles, touring on their fine horses while wearing bow ties as they planned the layout of Kenilworth Lake. Chiles was the developer of Kenilworth and in this photo is second from the right, on his horse Frank.

In hindsight, the layout of the current Kenilworth Lake makes sense. The original source water for the lake came from the headwaters of Ross Creek. ​​Ross Creek begins its journey down Piney mountain within the steep slopes of Chunns Cove. It parallels Chunns Cove Road as it travels down along Tunnel Road, turns into Kenilworth, forms Kenilworth Lake, then descends south over the dam to the Swannanoa River. It was a natural path for water and it must have been clear that a dam could be built to create a lake suitable for the planned residential and recreational area. 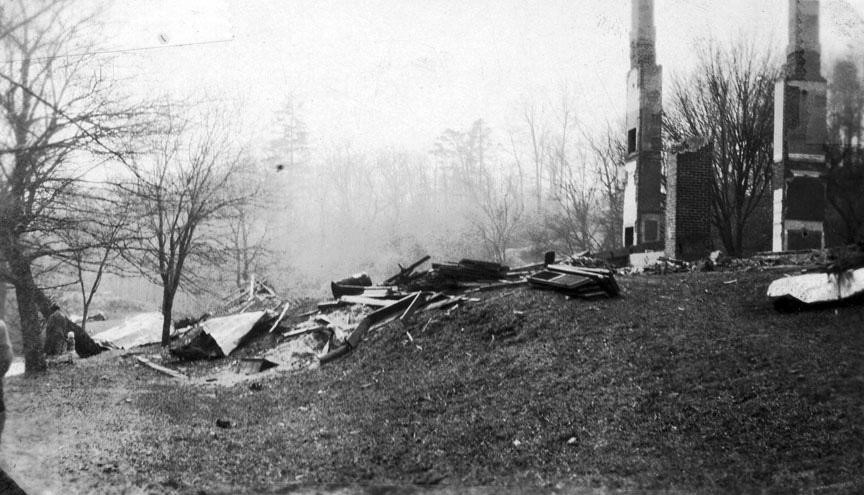 The area chosen for Kenilworth Lake was relatively clear of forests. The photo above shows the remains of the old Tanglewild property, which became the Erwin Patton farm. 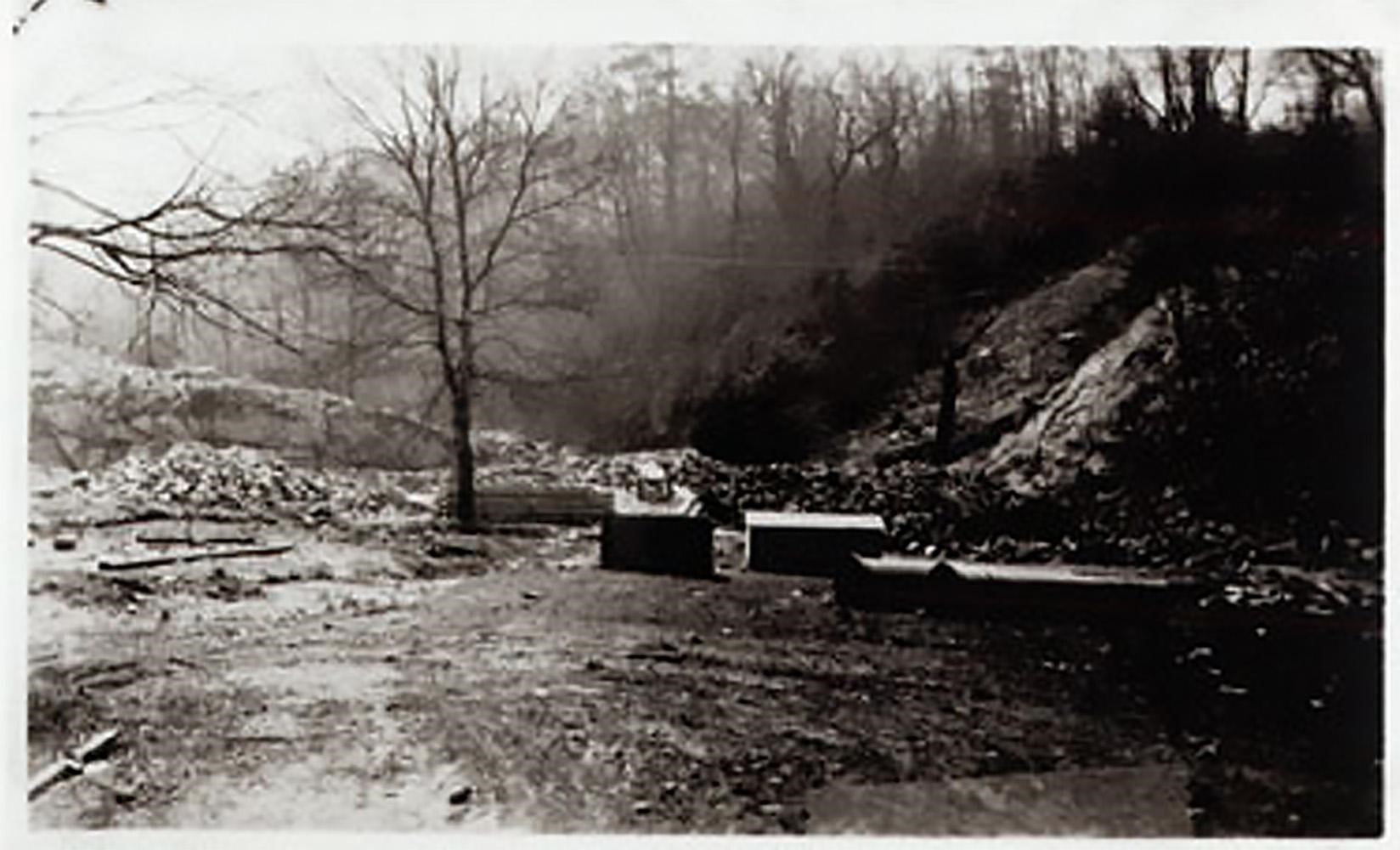 Much of the land was rolling farmland with a few outbuildings as seen in the above photo. This image shows the land being prepared for the dam in 1925. 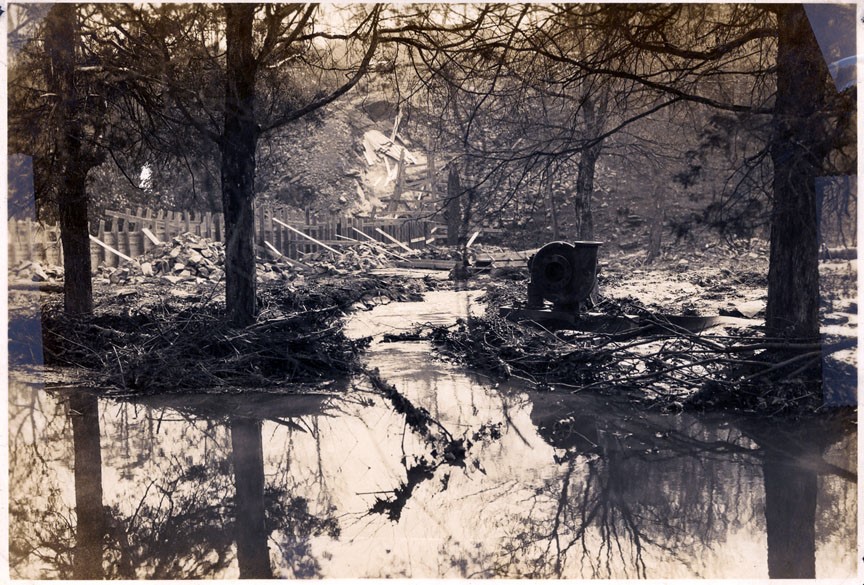 The dam was constructed using a rail system behind the dam itself. The photo above illustrates the site of the temporary dam and spillway behind the dam as it’s being built. 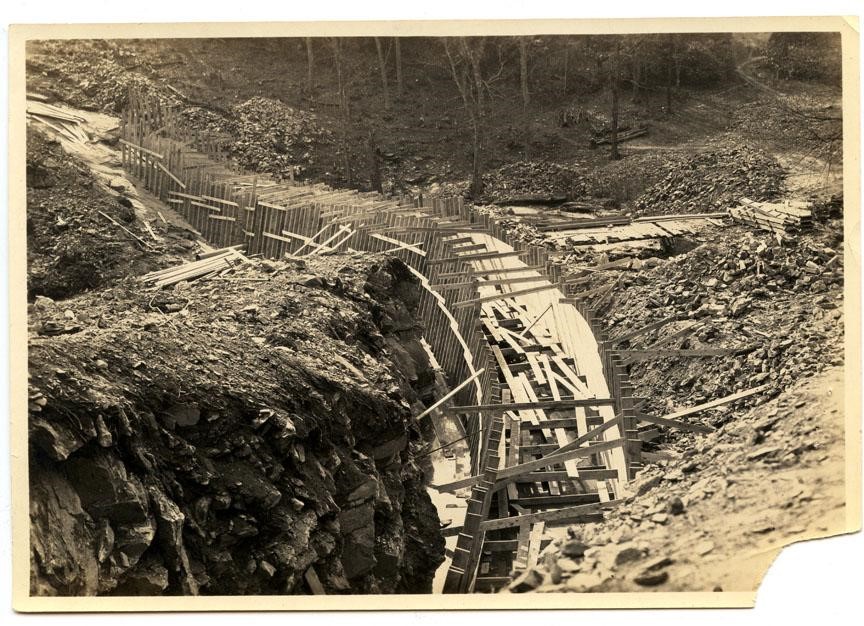 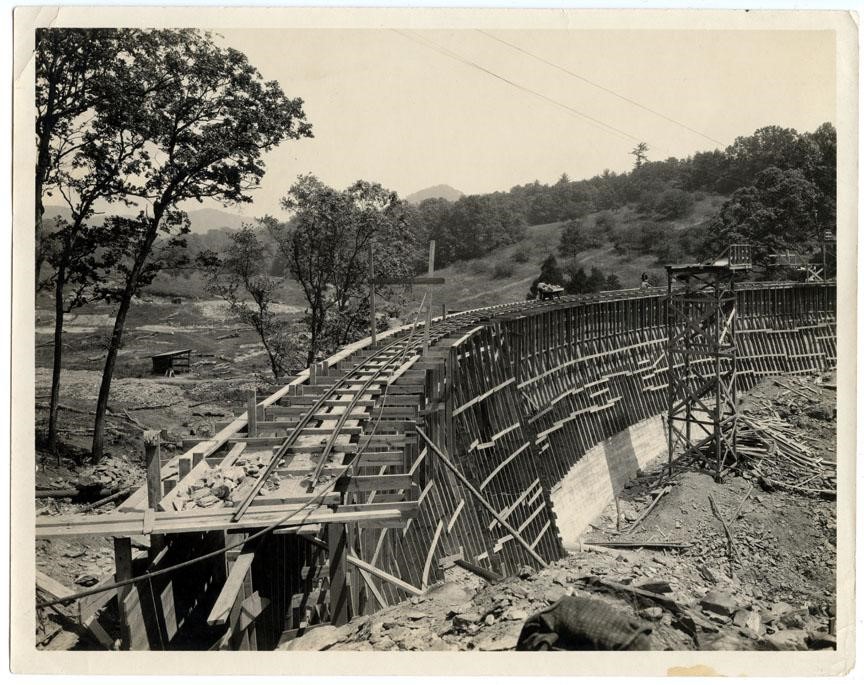 These two photos, above, show Kenilworth Lake dam under construction. Excavation work had been done, wooden supports were in place. In the second photo above, take note of the open field to the left with farm outbuildings that will soon be covered with water. Also note the rail system that runs along the dam’s top. 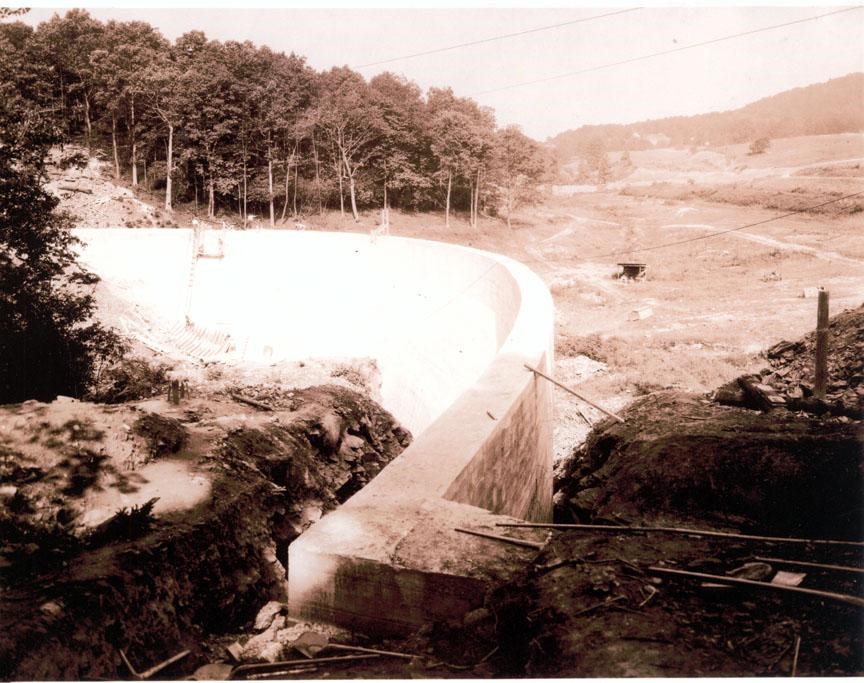 In the above photo, the concrete is poured and set. The dam’s valve is almost ready to be shut so the water may accumulate. 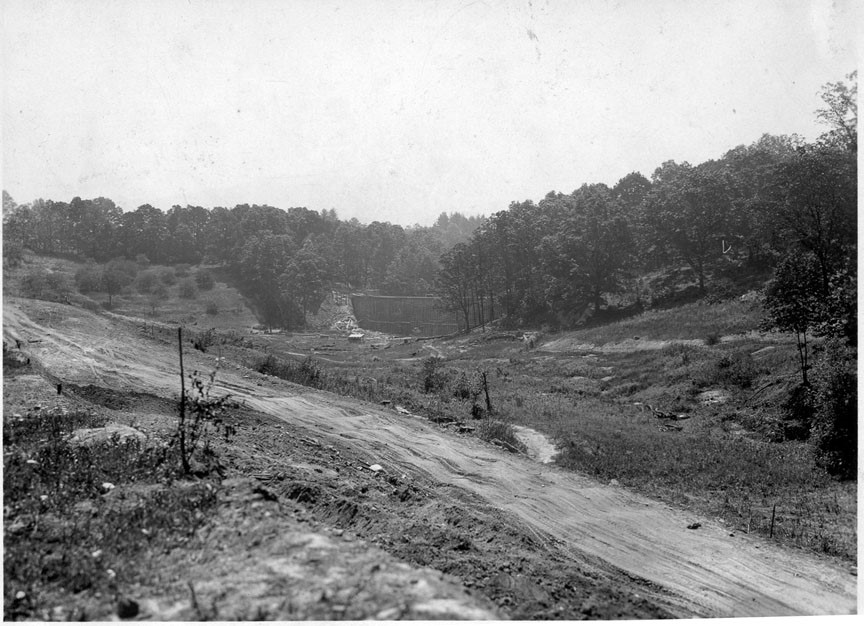 The photo above shows the dam as it’s finished, looking from the north to the south. The vast fields, fencing, outbuildings and trees upstream would soon be underwater. Perhaps the rutted road in the middle photo is a future Tunnel Road. 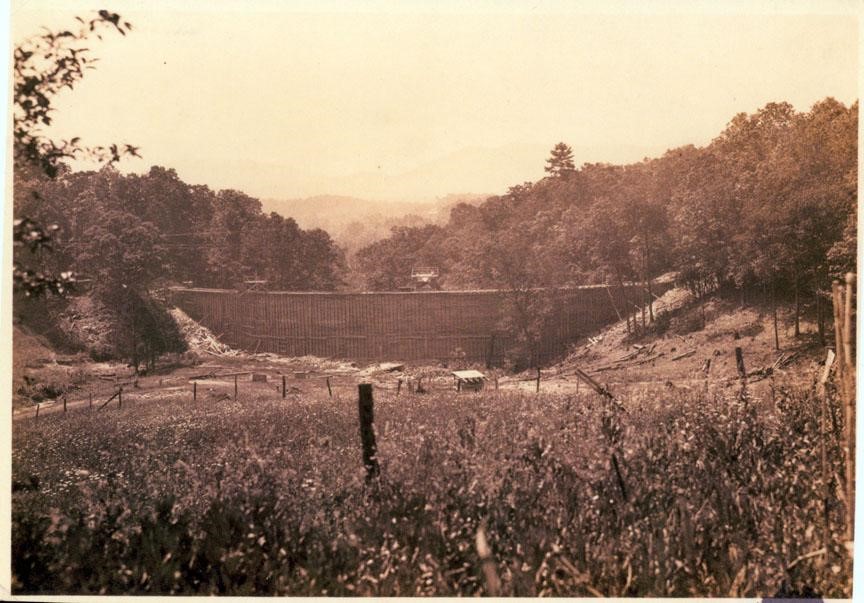 Finally, from 1925 – 1926, the Kenilworth Lake dam was completed and water was allowed to fill the newly created basin. 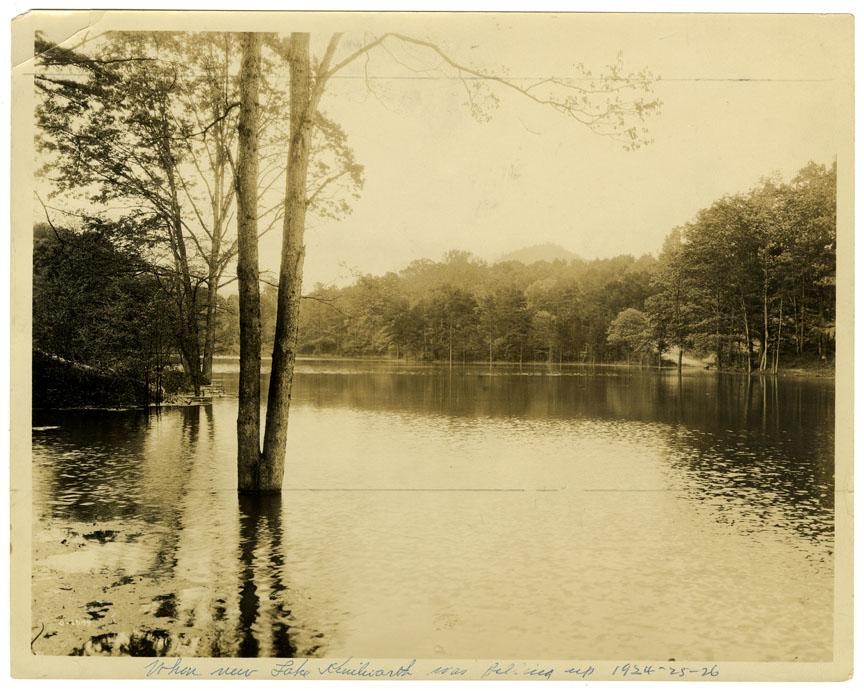 The Kenilworth Development Company swung into full gear as the lake was completed, marketing in the Citizen Times with quarter page ads under the headline: “Kenilworth, Klose To Town, Klean, Kwiet, Kool”: 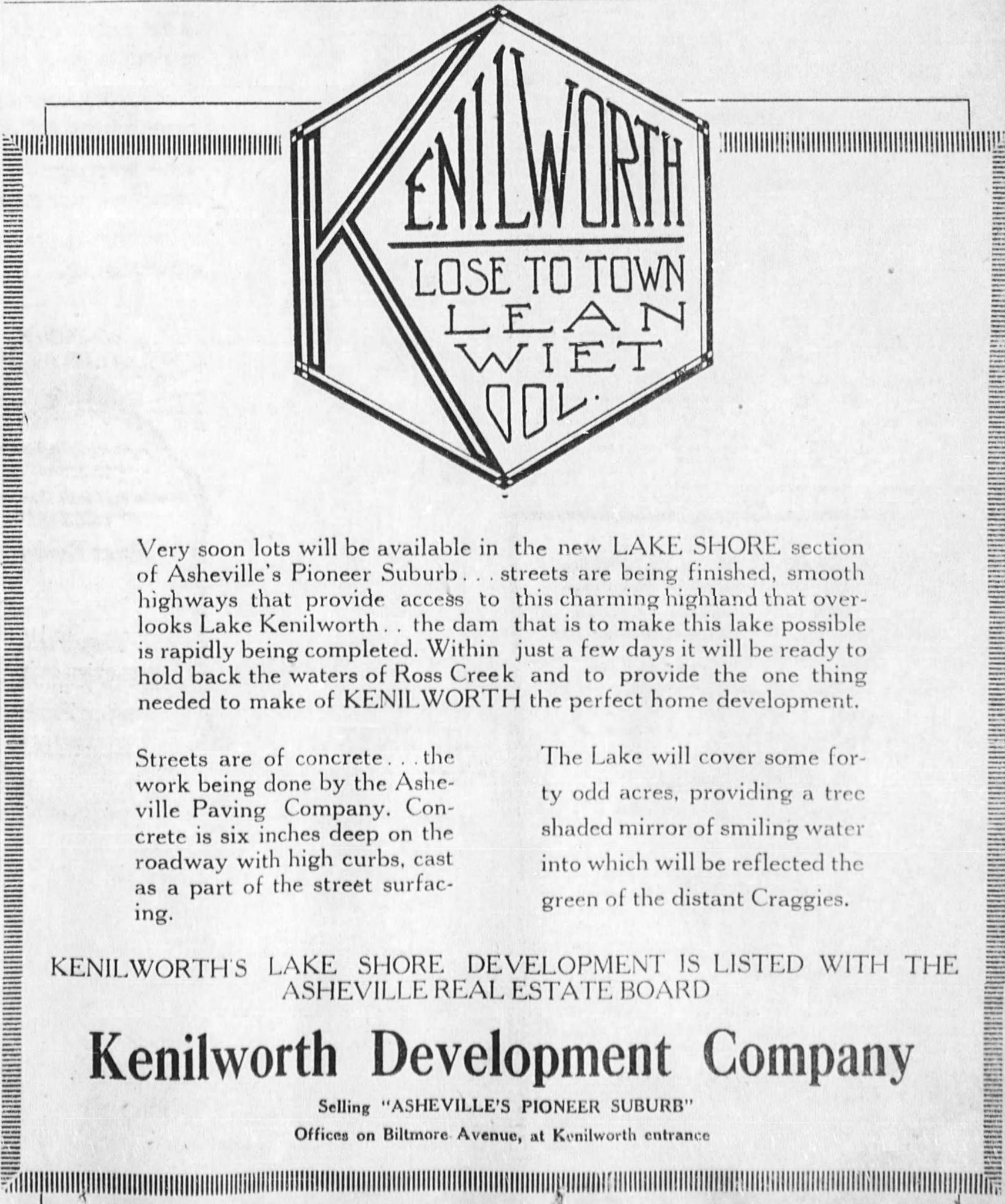 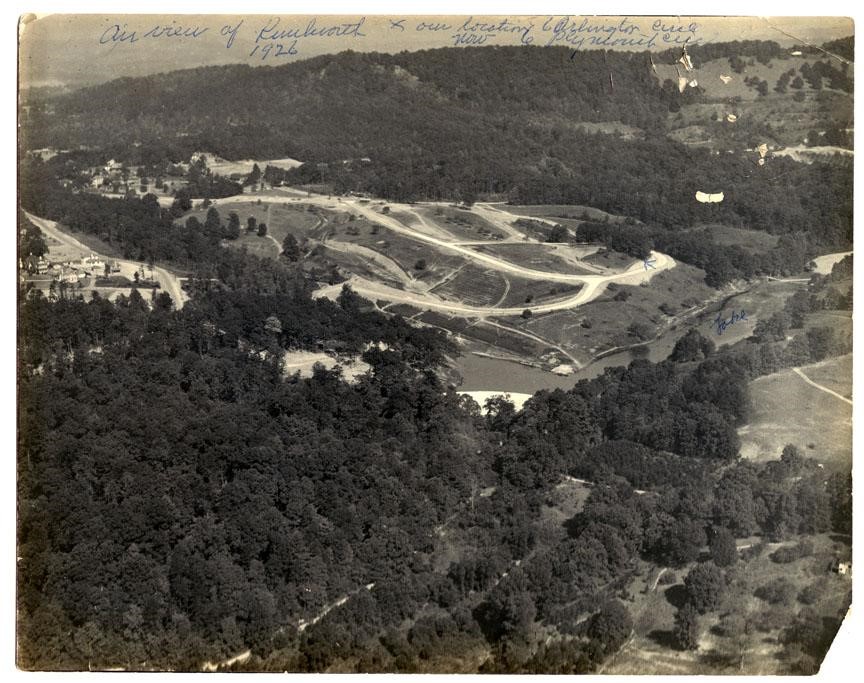 This aerial view of Kenilworth from 1926 shows the newly filled 44-acre Kenilworth Lake and a spider’s web of new streets forming in Kenilworth to the left of the lake. The large white, curved dam is visible (see next photo).

Coming full circle, imagine again the 1977 pilot searching for a sliver of unencumbered flatness on which to land his sputtering plane. He spotted the perfect, icy landing strip of Kenilworth Lake and landed successfully. 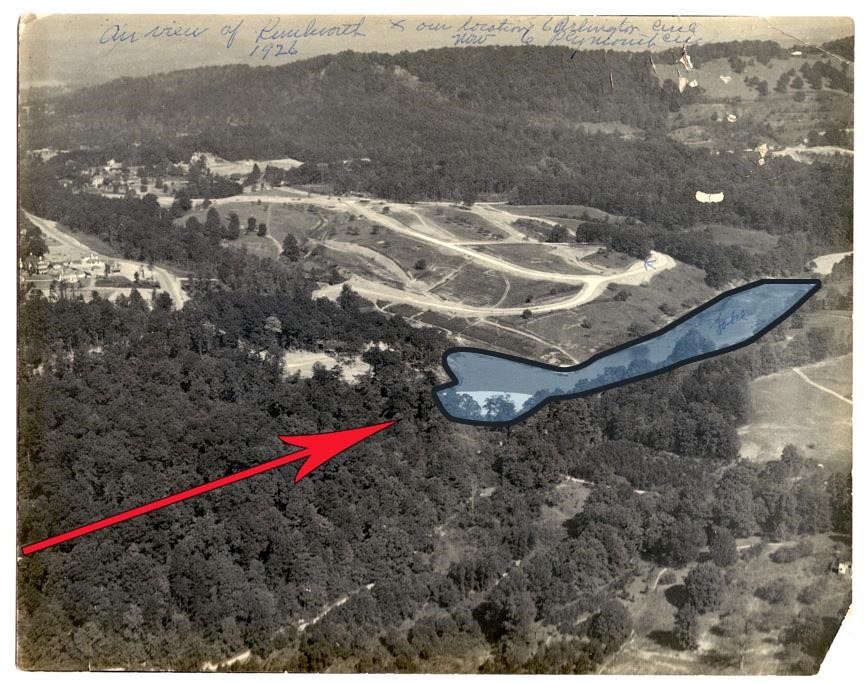 Neighborhood legend has it that the pilot, after meeting the astonished residents long enough for a photo op, tinkered with his engine a bit and deemed it fit to fly. He somehow positioned it on the icy lake and rigged the plane up against some trees. Forming a slingshot near the lake, with the plane’s engine running, it was released and able to take off and fly into Asheville history.

Looking at Kenilworth Lake today, in its shimmering, settled and landscaped beauty, one can easily assume that’s how it’s always been. It hasn’t been all that long, really, since bucolic pastures alone dominated the Asheville mountains and a pilot would have been hard pressed to find a safe landing place during an emergency.

The exceptionally good news is, though the exact pilot’s identity and description of the emergency landing remain a mystery, the plane is alive, well and still operating.

The Piper N3XX was first manufactured in 1946 at Piper Aircraft in Lock Haven, PA. Over the years it has had 23 different ownerships and has lived all over the United States. At the time of the Kenilworth Lake emergency landing, it was owned by the now defunct airline, Asheville Flying Service. Asheville Flying Service was owned and operated by O.D. “Lacy” Griffin, Jr. which in its prime was the only fixed based operation in town. The service had a large number of aircraft and pilot employees, so on the day of the emergency landing, it would be difficult to figure out exactly who was at the wheel. In 1979, Piper N3XX was sold to an individual in Deerfield, Il.  Eventually Asheville Flying Service was sold to Piedmont Airlines and then to Asheville Jet. 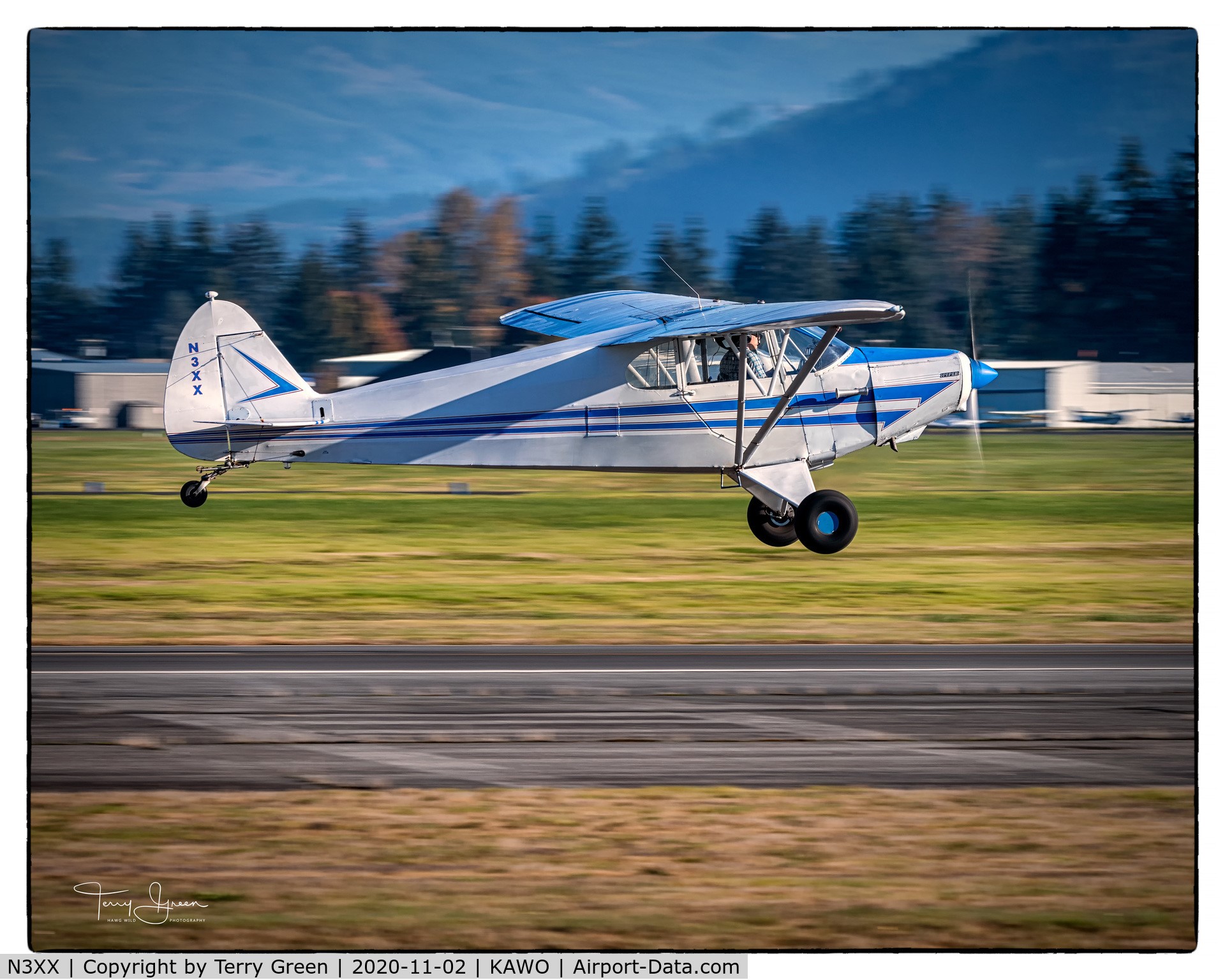 Today, Piper N3XX lives as “Xeros” and is working for Little Bird Airways (https://littlebirdairways.com/home-page) in Buffalo-Lancaster Regional Airport in Lancaster, NY. He is used for pilot instruction in tailwinds. The current owner had no previous knowledge of the interesting intersection between the plane’s 1977 engine trouble and the lake that the Kenilworth dam created, but is thrilled to add it to aviation history.