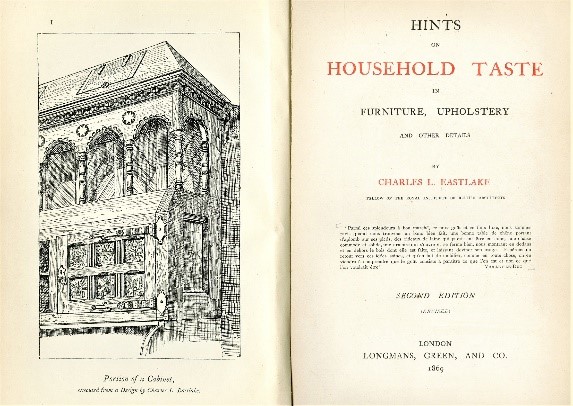 Before HGTV and DIY television, architectural design trends were influenced, popularized, and in fact, most often initiated by what we librarians used to call “print-media”: books, newspapers, and magazines. Author Daniel D. Reiff, in his comprehensive book on the subject, Houses from Books: The Influence of Treatises, Pattern Books, and Catalogs in American Architecture, 1738-1950, writes: “The printed architectural book, whether a sophisticated treatise or a modest builder’s manual, is now abundantly recognized as a significant factor in the history of buildings.”[i]

Reiff further proposes that “it was the Historic Preservation Act of 1966 and the resultant impetus given to state and local surveys of architecture (especially of the less monumental type) that exponentially broadened our knowledge of American domestic architecture during the last thirty years and inspired the search for possible design sources and patterns of diffusion”.[ii] This was the beginning, in the 1960’s, of the reprinting of many of these earlier builder’s manuals and pattern books, by publishers such as Dover Publications, who have now made affordable copies available for all who are interested in studying these early sources of design influences.

The period from 1865 to 1965, saw the greatest variety of architectural design and styles, far greater than the changes from 1600-1965.  After the Civil War, styles that started from treatises published before the war, such as A. J. Downing’s picturesque cottages, Ruskin’s writings on Gothic architecture, and Eugene Violett De Luc’s Lectures on Architecture, combined with Charles Eastlake’s 1868 publication, Hints on Household Taste, to prompt a flourish of revival styles during the 1870s-1890’s.  These styles had the commonality of giving importance to correct and often profuse ornamentation, fueled by the rise of machinery and the “manufactory” that could produce cheap ornamentation.  By 1900, architectural designers began to revolt against such tasteless excess and started promoting “modern” styles for a new age, rooted in a return to true art.  It started with the Arts & Crafts Movement with its return to “honest” handcrafted homes and furniture, which here in America was promoted by the writings and plan books written by Gustav Stickley and Elbert Hubbard.

The period from 1915 to 1945 was a complex time for architecture with those promoting “traditional” styles such as Colonial Revival and Monumental Classical juxtaposed to those promoting “Avant Garde” styles such as Prairie Style, Art Nouveau, Art Deco and Streamline Modern.  Le Corbusier’s book, Towards A New Architecture published in 1927 called for a “new architecture”, based on humanist values, totally devoid of any basis on tradition or historicity and one where “structure” was the only “ornament”.  By the 1930’s and 1940’s Le Corbusier’s, maxim “Less is More” became “Modern Architecture” and predominated architectural design for the next three decades.  Modern Architecture remained virtually unchallenged until 1961, when Jane Jacob’s, published her ground-breaking treatise, The Death and Life of Great American Cities in which she attacked Modernist architecture and its de-humanizing effect on American cities. Her book not only paved the way for Robert Venturi’s 1966 Contradictions and Complexities and the Post-Modernist Movement with its return to traditional architectural design, but it also helped promote historical preservation by advocating for the renewal of traditional neighborhoods over the previous slash and burn tragedies promoted by proponents of “urban renewal”.

All these various styles and architectural movements were started or at least fueled by books, treatises or plan books published during the hundred-year period from 1865-1965 and are reflected in this timeline below. 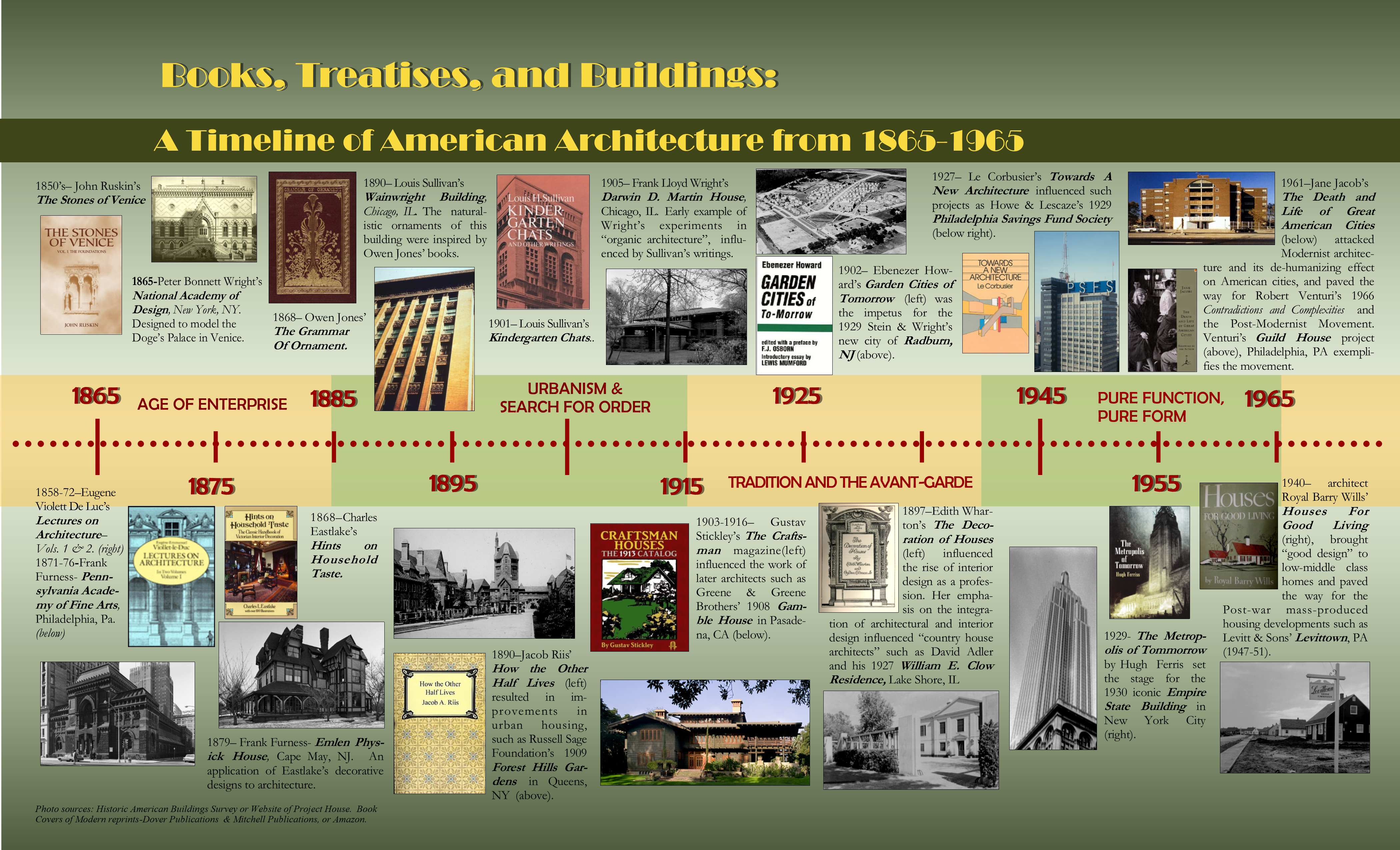