Every preservation easement marks the permanent protection of history that might otherwise be lost. PSABC manages these easements and the reporting that goes along with that responsibility in perpetuity, offering technical support to the owners and ensuring the historic integrity of these special places. 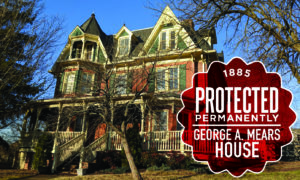 The George A. Mears House located at 137 Biltmore Avenue, a two and a half story brick Queen Anne style building constructed in 1885 by George Mears. Mears was an Asheville merchant who was in business between 1870 and 1910 on South Main Street, principally with his Mears Daylight Store, which burned in the 1920s (the building was so named because of its large expanses of glass).
One of only a handful of remaining late nineteenth century residential buildings in downtown Asheville, the Mears House is also one of the last relatively intact examples of the types of houses that once populated the area, with architectural styles that included Greek Revival, Cottage Gothic, eclectic Victorian, and Queen Anne. Particularly notable is the house’s elaborate slate-shingled mansard roof with prominent gables and gable-roofed dormers with finials.

Former Vice Mayor, Edward C. Hay, Jr., had this to say about the home:

“When our partnership bought the property in 1984 the building at 137 was boarded up and had gone downhill considerably. Volunteers from the Asheville Police Department would decorate the house at Halloween to give children a safe place to Trick or Treat. We were able to preserve the property and do considerable restoration, and over the years the historic place has become dear to us. Conveying it to folks who will further enhance and restore the character of the property feels very good. We couldn’t be happier.” 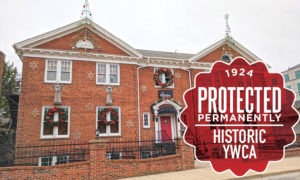 The historic YWCA at 11 Grove Street was built in 1924 and designed by William H. Lord. Ten years later a residence hall funded by Samuel E. Moorhead of New York and designed by Clinton MacKenzie was added and is attached by a two-story breezeway.

The building has a rich history in the community, most notably, hosting a speaking engagement for First Lady Eleanor Roosevelt in 1956. She was only willing to speak at integrated locations and at the time, the YWCA was the only Asheville location willing to accommodate her.

Today the 22,000-square foot building is used for commercial purposes and there are plans for structural work and interior updates. 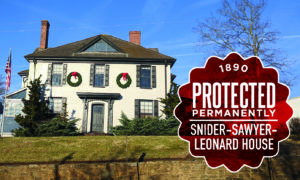 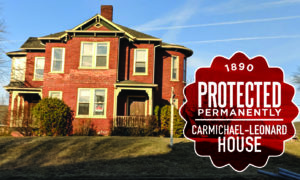 The two story brick, Snider-Sawyer-Leonard house was built as a private residence and later operated as Dr. Milton Leonard’s animal hospital from the 1940’s through the 1960’s. Though the home sat empty and deteriorating through the early 2000’s, it has since been rehabilitated and is currently in use as law offices.

The two story brick [Italianate](https://en.wikipedia.org/wiki/Italianate_architecture) Carmichael-Leonard house was built as a private residence by W. C. Carmichael.  It had numerous owners before being purchased by Dr. Leonard and his wife Pearl in 1944, no doubt due to its proximity to his animal hospital next door.  The building was rehabilitated in the 1990’s and functions as office space today. 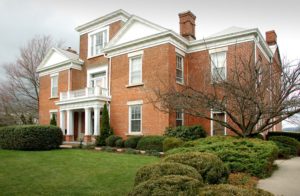 Built during the 1840s as a residence, the Ravenscroft School building is, for western North Carolina, an unusually academically-detailed example of the Greek Revival style, complete with pegged modillions and triglyphs and interior door surrounds with acanthus corner blocks. Its massing, apparently derived from a plate of an Italianate house design in one of A. J. Downing’s pattern books, is equally uncommon in its use of a recessed three-story central tower with flanking pedimented pavilions.

In 1856 the Reverend Jarvis Buxton, rector of Trinity Parish in Asheville, announced the opening of the Ravenscroft School for Boys in the house, located on 13~acres off Church Street. The Episcopal State Convention had established the school in 1855 to serve as the diocese’s boys theological and classical college and as a memorial to Bishop John Stark Ravenscroft. Reverend Lucian Holmes served as the headmaster from 1861 to 1864, when the Civil War forced the school’s closing. After the war the Ravenscroft Associate Missions and Training School was opened in the building, allowing young men to train for the ministry under Reverend Buxton. A new building was erected for the training school in 1887 and the Diccesan convention re-estabished the boys school in the house. The school closed around the turn of the century, and the building was used as a boarding or rooming house until 1977.

B & B Motor Company 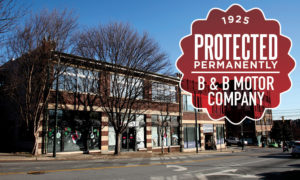 The B. and B. Motor Company Building is the earliest of the auto showroom and service facilities on Coxe Avenue and one of the first structures to be built on the Avenue after its opening. Unlike later auto buildings on the Avenue, the B and B building is only two stories high, perhaps a reflection of land cost pressures that had yet to come or a relatively-limited demand for the Chevrolet dealer’s autos in 1925. The B and B facility was organized much as modern dealerships are, with display and servicing taking place on the first floor. Like the other Coxe Avenue dealerships, it used a corner location to maximum effect, with a street-level display of its showrooms and an
attractively-ornamented facade. 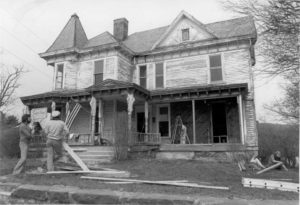 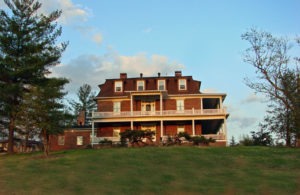 The Reynolds House was erected in the mid-1850s by “Colonel 11 Daniel Reynolds, a locally prominent farmer and former hotel owner, who only recently had waged an unsuccessful campaign against kinsman Zebulon Baird Vance for a seat in the North Carolina House of Commons. The house was originally a double-pile plan brick structure, a conservative but substantial plan type built only by the most prosperous of western North Carolina’s citizens before the Civil War.

The relative prosperity surrounding the Reynolds House declined markedly during and after the War; and by the time of his death in 1878, Daniel Reynold’s estate had been reduced to fairly modest proportions. The house was subsequently owned by Asheville businessman William Taswell Reynolds, whose son, Robert Rice (“Our Bob”) Reynolds, would one day become one of the most colorful and controversial members of the United States Senate. It is very likely that Senator Reynolds spent at least some time at the Reynolds House during his youth; and it is virtually certain that he visited there frequently as an adult, during the years that the house was owned and occupied by his mother and uncle. Reynolds’ uncle, Nathaniel Augustus Reynolds, undertook an extensive renovation and expansion of the Reynolds House soon after paying off an existing mortgage in 1904. These alterations included the addition of a third floor with a mansard roof and dormers, the addition of Colonial Revival porches and interior woodwork, and the installation of bathrooms. Nathaniel Reynolds lived there from about 1930 until his death in 1950. The house remained in the Reynolds family until 1973. 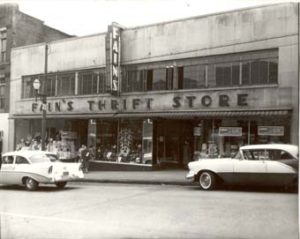 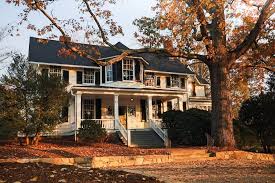 
Our Home | Our History | Our Future

Our History
Our Future
Our Home