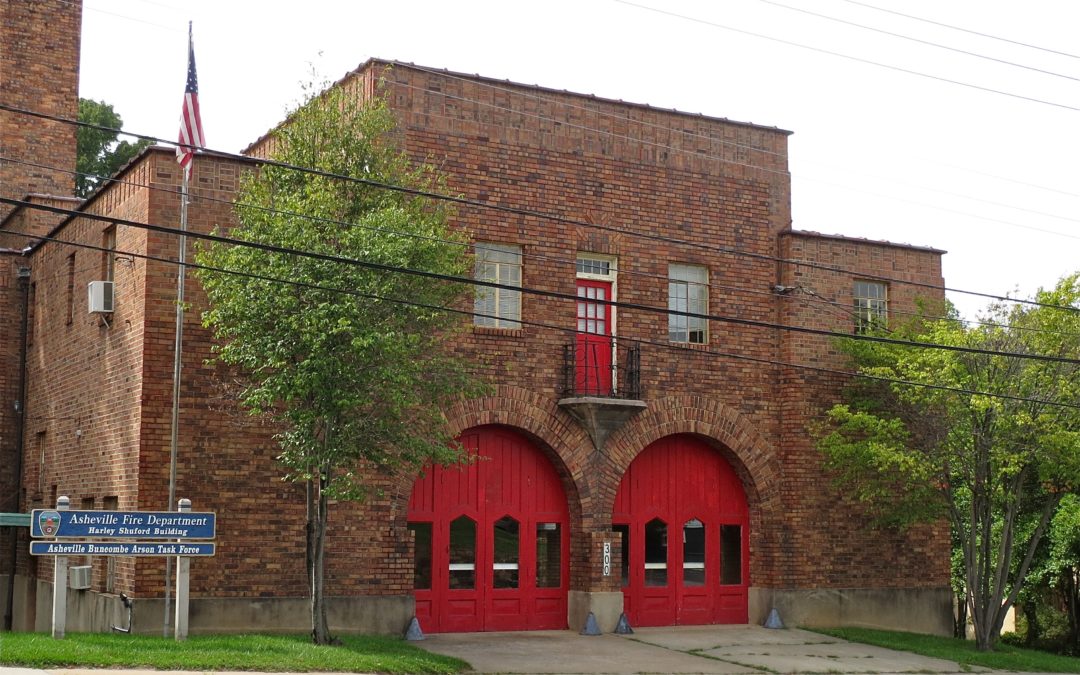 “NORTH ASHEVILLE TO GET $40,000 FIRE HALL SOON”, announced the Asheville Citizen-Times, on November 21, 1926.  The article further announced that, “Plans for the new structure have already been drawn by Douglas D. Ellington, architect, and accepted by the City Commissioners.”  The location for the new fire hall was only referred to as the “northern section” of the city.[1] The exact location, “on the Westside of Merrimon Avenue, near Spears Avenue, …approximately 170 feet south of the Congregational church,”[2] was published in a later article.

It was also announced that the new structure, would “…be approximately 50 by 50 feet. The ground floor will contain apparatus and office. The second floor will be of dormitory style and will provide recreation, locker room, bedroom with 14 beds and bath facilities and will be equipped to make it homelike for the men.”[3] 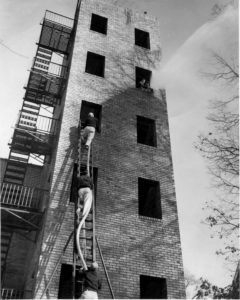 The most unique feature of the new fire hall was the 75-foot high six-story brick “practice tower”. The tower was added to the plans “at the suggestion and request of the fire-underwriters”, as training facility for all the city firemen.[4] The fire-escape stairs and double rows of window openings were designed to simulate a typical building, to be used for rescue and fire-fighting training.  Today the tower is also used as a cell-tower base.

Work on the new fire hall was commenced shortly after Christmas of 1926, with completion expected to be in early Spring of 1927.[5] However, the official completion date was not until June 15th of 1927.[6] An interesting note is that the completion date was announced in a May 6, 1927 article in the Citizen-Times which was actually about the new Bartlett Street fire-station, which also was being designed by Ellington. I find it just short of amazing that during a five-year timeframe, 1925-1930, Ellington was responsible for designing an inordinate percentage of Asheville’s most prominent civic, public, and educational buildings. Why is that-well I’m not sure, and I’ll let that be solved by a social-historian.

The building design appears, at first glance, to be a stream-lined Art Deco design, YET upon further investigation we see that it is really a blend of the modern Art Deco with touches of Old-World Architecture.

The boxy shape with the simple streamline geometric lines of the building, are in keeping with the Art Deco style.  However, in counterpoint, the rough mottled-colored brick gives the building an Old-World rusticity, hinting to Ellington’s Classical European architectural training at the Ecole des Beaux Arts.  The heavy round arches over the garage door openings have their origins in Ancient Roman architecture. The lovely “Juliet balcony”, a decidedly feminine touch on an otherwise masculine-looking building, is a design motif straight out of Europe. 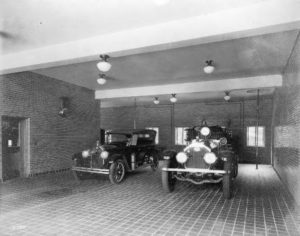 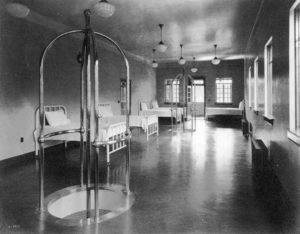 The interior of the fire hall is of masonry construction with glazed-tile walls, and clay-tile floors on the first floor, and plastered walls and ceilings with simple coved plastered cornices and tile floors in the second-floor spaces.  The station originally had two brass fire poles for easy and quick access to the firetrucks from the second-floor dormitories.  Although the rear pole has since been removed, the front pole remains. 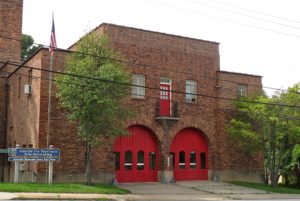 The Merrimon Avenue Fire Station, also known as Station #4, was officially closed in 1976, but was retained by the city. It re-opened in 1997 as the home of the Asheville City Arson Task Force. A few years ago, the Arson Task Force moved out, leaving the building vacant again.  Since that time the Preservation Society has been pursuing a cooperative effort to aid the City in restoring the building to active use and in seeking measures to insure the building’s future and ongoing preservation.

[2] New Fire Station to Be on Merrimon, Near Spears”, Asheville Citizen-Times, Wednesday, December 1, 1926.

[6] “Will Start Soon on Fire Station, Will Re-locate Bartlett Station When Plans Are Ready”, Asheville Citizen-Times, Friday, May 06, 1927.