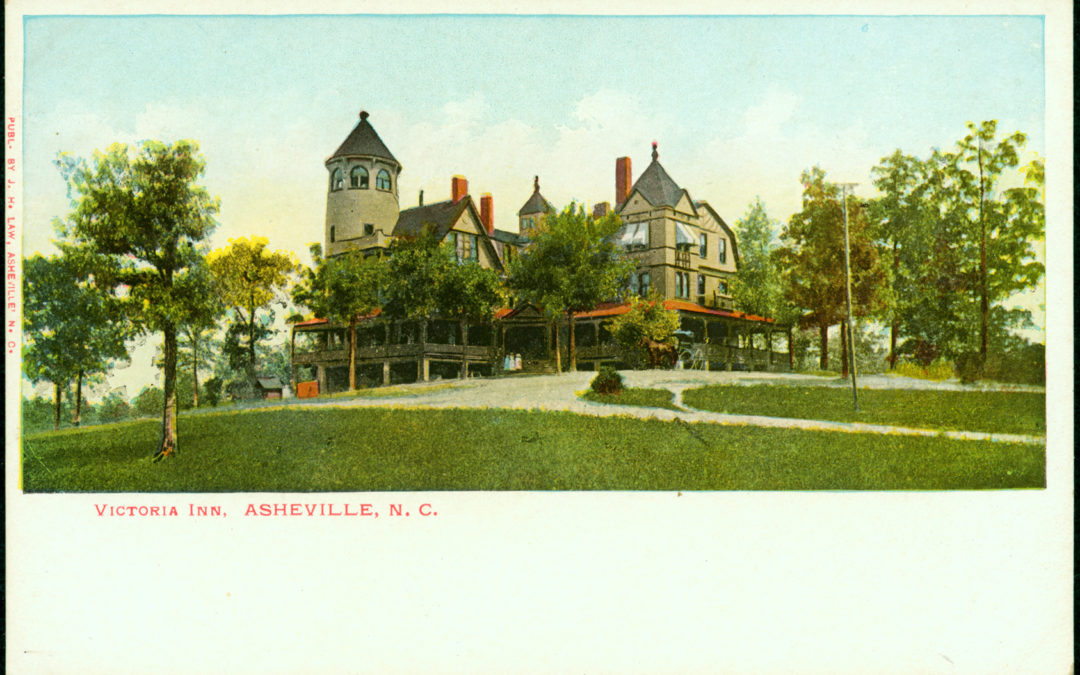 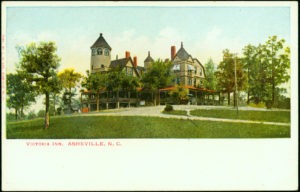 Attending St. Genevieve-of-the-Pines (SGP)  K-12 in the old  ”Victoria Inn” (later the SGP “Main Building”) was “home away from home” as a day student.  The grammar school was on the first floor, classrooms encircling a small gym/assembly/play room.  There was a St. Patrick’s Day treat we  hoped for  every year.  In the small gym, the Irish nuns would begin conspiratorial whispers and smile looking toward us.  Then with an  Irish tune suddenly on the “record player, and securing their floor length skirts up, but still modestly well below the knee, the academic and cloistered personas fell away and they  would,  to our delighted surprise,  dance a rousing Irish jig, dancing and singing with us in the assembly room, like the lively young women they were.  The Victoria Inn was a beautiful setting.  I loved going to grammar school there.  It was demolished in the early 1960’s.

It was a fine Victorian hotel in the Golden Age.  Visitors enjoyed the clean air, hikes and carriage outings.  They lingered on the gracious surrounding porch and walked lush grounds with panoramic views of the mountains. Several incarnations and a small fire later, the inn was purchased in 1909  by nuns from France and Belgium,  the “Religious of Christian Education” (RCE), to house their convent and enlarge the  fast growing  school and college founded in 1908 on Starnes Ave.  Almost eight decades of dedication to teaching girls and boys a classic education followed.

A small assembly/gym room was inside the encircling classrooms on the first floor, large enough for students to gather before classes  every morning, standing in rows by class year.   Mother Winters led us in morning prayers, all of us on our knees, then rising to salute the flag to say the pledge of allegiance and sing an inspiring song, usually from the hymnal.

The nuns loved to sing and to tell stories that brought events and subjects alive.  Older nuns (some of the founders were still teaching  in the 40s and 50s) had been in the thick of WW1 and 2).   They would tell us about the hardships, close calls, evacuations leaving all behind,  and hiding soldiers or citizens from the Nazi’s in France, Belgium and Germany.

In the assembly/gym we also had our little holiday parties and dancing instructions, with ballet classes by the Fletcher School of Dance. The nuns taught us the Virginia Reel and Square Dance as well as the box step in 7th and 8th grades. These to prepare us for our first social dances with boys in the big auditorium (Ivy building now)!  The school was coed until 1949 when I was in second grade. The Memminger  Estate complex became the boys’ school then and named Gibbons Hall.  At those afternoon dances we practiced the social graces as we met with Gibbons hall boys for our first dances together.  I still have my dance cards.

Wonderful speakers came.  We were marched over to the auditorium (Ivy) to see and hear them. From Eleanor Roosevelt to the courage and determination of Helen Keller, to Basque separatists who made us aware of the struggles for freedom in Franco’s Spain and their mortal sacrifices we became aware of the larger world and our place in it. Missionaries continuing the work of Father Damien came from Molokai, Hawaii.  We learned about Father Damien’s selfless work and early death among the lepers there, grateful for our own blessings, and humbled at taking them for granted.  Dr. Tom Dooley spoke to us about his medical work in Laos, his charisma and quiet zeal lighting fires within so many. In later years the Peace Corps was modeled in large part after his work there. The Victoria Inn, St. Genevieve’s and Gibbons Hall are only a memory now, but their spirit lives.