What Style is it? And What is Style? 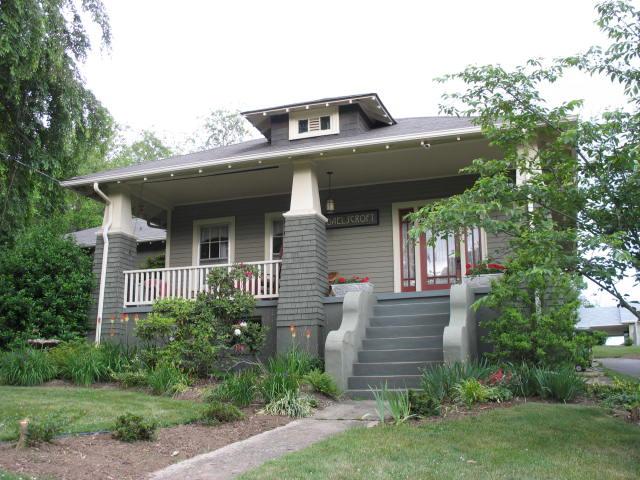 “Style” is the word we most use to describe a building. By that we mean what architectural style is that house or building? But what do we mean by “style”?  “Style” is the distinguishing details and design of a building that tell from what period the design evolved and what motifs, details and ideologies were used to design a specific building.  Let me use our sweet little bungalow in Asheville, NC as an example.   If I were asked, “What Style is your house?”, I would reply that it is a “late Arts & Crafts style bungalow”.  But I would add that, though the preponderance of the house’s massing and details are in keeping with the Arts & Crafts style, there are elements of the house which are not characteristic of the “Arts & Crafts” style. 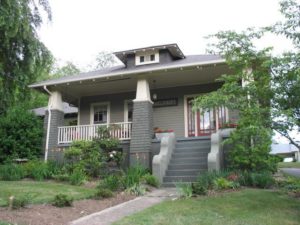 The one story low massing of the house and its hipped roof with its deep overhangs and exposed rafter tails clearly are in the style of a “bungalow”, reminiscent of the thatched “bungalows” of northern India from which the style was derived.  Dictionary.com describes a bungalow as: “a one-storied thatched or tiled house, usually surrounded by a veranda.”  Another source says that the word bungalow comes from the Hindi word bangla or baṅgalo or Bengali  -from modern-day Bangladesh.

When the “bungalow” was first introduced into English architecture, it was most often associated with stucco, tile or masonry walls, with tile roofs.  However, when the style began to flourish in the US the walls were mostly adapted to wood-framed construction utilizing clapboards or shingles for exterior siding.  Our house has clapboard siding on the body of the house and wood shingles on the front porch bases.

The large tapered boxed (and almost over-scaled) columns on the front porch are hallmarks of the American Arts & Crafts style, as is the low hipped roof dormer on the front of the house.

The oddly shaped concrete front stairs leading to the porch are a later addition to the house, and were probably styled after the whim of the homeowner or the result of a “style-challenged” builder!  They certainly are not in keeping with the Arts & Crafts style.

The inconsistent detailing of our house is probably due to the fact that the house was built in the late 1920’s (at the end of the Arts & Crafts movement), and more importantly, because the house was probably built as a “spec” house (there is a twin house around the corner, built about the same time) and adapted, I suspect, from a published plan (although I have searched many old house plan books to no avail).

My house is a lesson in style identification. It shows us that when determining the “style” of a building, we must realize that very few buildings are pure examples of a certain style, and that often the lines are blurred, and that a building’s “style” is most often a result of many influences-historical context, available materials, location, and the skill and knowledge of its designer/builder.