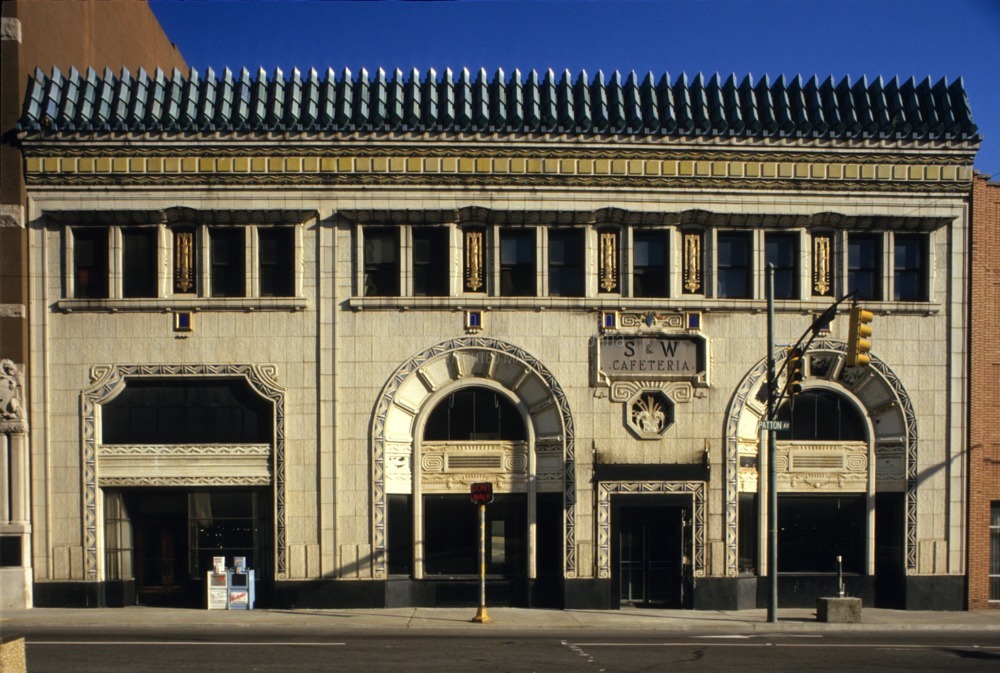 Douglas Ellington’s S & W Cafeteria is a product of it time and place. Its design reflects the spirit of the “Roaring Twenties” when excess and extravagance reigned, and “convention” was passé, and the mantra was as Cole Porter so aptly sang, “Anything Goes”! The garish and dazzling Art Deco design of both the exterior and the interior of the building makes one think more of an elegant dinner club, than a cafeteria where food was hashed out onto plates on trays to people going through “the line”.

At the age of 16, Frank O. Sherrill went to work as an interior decorator for the J. B. Ivey Department Store in Charlotte, NC.  A few years later, Sherrill partnered with Fred Webber to operate the concession in the J. B. Ivey lunchroom.  But at the age of 21, Sherrill quit his job and journeyed out to California, where he observed the new “cafeterias” which were beginning to be popular in California. Sherrill returned to Charlotte, and in 1920, in partnership with Webber, opened the first “S. & W. Cafeteria” in downtown Charlotte. A year later they also opened another S. & W. Cafeteria in Winston-Salem.  In 1922, Sherrill and Webber opened a third S. & W. Cafeteria in Asheville at 43 Patton Avenue.  Soon new cafeterias were also opened in Greenville, SC, Raleigh, NC and Atlanta, GA.[1] 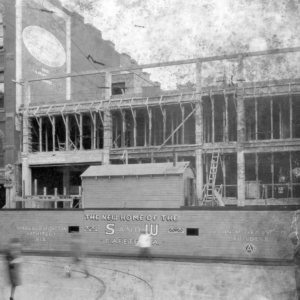 By 1929, Sherrill and Webber’s five cafeterias were serving over 3,000,000 meals a year.[2] At the same time Asheville was at the height of a burgeoning population growth and frenzied building boom.  Sherrill and Weber decided to build a larger cafeteria at 54 Patton Avenue.

The new two-story cafeteria building was divided into two parts. The western two-thirds of the building was designed for the cafeteria, and the remaining third, to the east was designed as a separate retail space. Because the building was sandwiched between two adjacent buildings, the only visible part of the building was the front façade. Architect Douglas D. Ellington, who was also an accomplished artist and painter, treated the façade like a painter’s canvas. Using bold colors and artistic design motifs Ellington produced a façade that was striking in its appeal to the eye, and which functioned as a visual advertisement for the cafeteria. In writing of his design for the new building, Ellington revealed that, “The note of gaiety which has been struck both in the façade and the interior has been deliberate, this cheerful, or semi-festive quality being fitted to the purpose of the establishment and in keeping with the life of a community where recreation is an important activity.”[3] 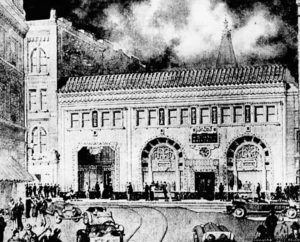 I’m sure Ellington enjoyed this commission, as he was given license to create a design using many of his own design philosophies, unhindered by any client’s preconceived ideas of architecture.  “The new S. and W. cafeteria is a result of applying unhampered architecture to an individual commercial need, or, more nearly, the evolving of an original specific architecture for a specific business structure in a specific site within a specific community.”, wrote Douglas Ellington himself, in a July 1929 newspaper article, published upon the opening of the new cafeteria.[4]  Ellington also claimed that the building was “… new architecturally in its lines, shapes, and uses of material, uses and shades of color, and other matters of proportion and detail.” However, although the building does appear to be “new architecturally”, Ellington used classical design principles of composition as his underlying design strategy. He, consciously or unconsciously, admits to using these principles on his design for the cafeteria, as he further described: “In the matter of appearance, the most important elements of the structure are scale, texture and color. Each proportion is related to all other proportions, each surface is related to all other surfaces, each bit of color is related to all other color motives, and in turn all of these are related to each other.”[5]  This interrelationship between the “parts” and the “whole” is a foundational principle of classical design.  Steven W. Semes, in his foreword to a modern reprint of Georges Gromort’s 1904, The Elements of Classical Architecture, offers a definition of classical architecture in which Semes states that “classical design arises from understanding composition based on a hierarchical formal system governing the interrelations of parts and whole: every part is also a whole, and every whole is also a part.  The relations among the parts, and between the parts and the whole, are developed in accordance with the requirements of structure, the demands of symmetry, and the play of inflection.”[6]

An architectural description of the building is best achieved by citing excerpts from a contemporary account, as observed by a newspaper reporter, when the colors, textures, and materials used on the building were new and fresh.  Let’s start with the exterior:

The façade proper has been done in polychrome terra cotta in mottled grey and ochre.  The main surfaces are chestnut bark pattern while the decorations are in a smooth textured terra cotta in the same color.   The base of the façade is in Belgian black marble, as are also the trimmings about the door and the name plate upon which the name “S. & W. Cafeteria” is imposed in gold.

Especially notable in the decorative effects of the façade are five gold ornaments on a black background separating the window bays of the second floor.

The panels in the tympanum surrounding the bronzed grille of the large windows are also finished in black and gold.

Colors in the cornice members and architrave are of aqua marine and ultra-marine with brilliant green, gamboge[7] and ultra-marine in the main cornice. In the top of the main cornice, the metrope [sp][8] is of nugget gold terra cotta, a very rare and beautiful material.  The roof slanting upward from the cornice is in two shades, pale cyanamide blue and veridian green.[9] 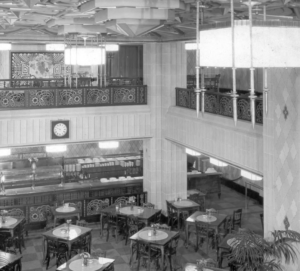 A contemporary account of the interior also reveals more of Ellington’s comprehensive and striking design for the cafeteria:

The cafeteria will occupy all of the ground floor, the mezzanine, and the basement.  In addition to the dining room on the first floor there are double-capacity service counters at the southern end of the beautiful hall, and beyond those, completely hidden from the view of the public, the kitchens. The architect in designing the dining room tried to impart to it as much home atmosphere as possible.  There will be beautiful green and gold tables with chairs of the same color scheme, both on the main floor and on the balcony.

The floors are designed of colored terrazzo, divided in large squares, and beautifully bordered. The ceiling is blended of harmonious hues.

Entrance to the dining room will be through a large revolving door.  The handsome well, two-stories high, is surrounded by huge pilasters and from beams of the ceiling hang bronze and wrought iron lighting fixtures with opaque and amber glass.  Directly opposite the entrance is ornamental grill work beyond which are the serving counters.

The walls of the dining room are of terra cotta in a pattern design of three shades of a warm, light buff color.  The design of the terra cotta used in the walls is of a form frequently seen in Italian brocades, save that they have no superimposed figures.  The cornice above is of apple leaf green and gold.

Approach to the balcony is by a double stairway at the left of the dining room.  This stairway itself is a magnificent piece of work, being handsomely designed and decorated. About the well of the mezzanine is beautiful railing.

In the rear of the mezzanine are four private dining rooms which are so arranged that for banquet purposes they may be thrown into one. The walls of these dining rooms and the doors are of cypress.[10]

When Frank Sherrill was asked by a local reporter in 1929, why S. & W. Cafeterias decided to build such a “lavish cafeteria” in Asheville, he replied, “Asheville deserves the finest structure of our chain, because Asheville is one of the show places of the country”.  Sherill went on further to explain that those who come here for its magnificent scenic and natural beauty, according Sherrill, “are entitled, when they seek their daily repasts, to find them amid surroundings which elevate the spirit and lend themselves to the completest enjoyment of the food they eat.”[11]  But Sherill’s best reason, in my opinion, for building such a “lavish” cafeteria, is one that modern day Asheville developers would be wise to heed: “Because Asheville has such a cosmopolitan population, and has such a constant flow of visitors, it is natural that everybody that does any building here should try to do it in as artistic manner as possible”. “We felt that the whole atmosphere and setting of the town justified more than an ordinary building.”[12] 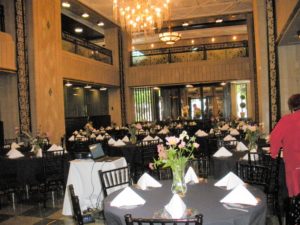 [1] Info from: “Idea Occurred During Journey In California: Millions of Meals Are Served Yearly in Cafeterias”, Asheville Citizen Times- July 15, 1929, Section B, page 1.

[7] Gamboge is orange to brown in color and when powdered turns bright yellow- https://www.britannica.com/topic/gamboge