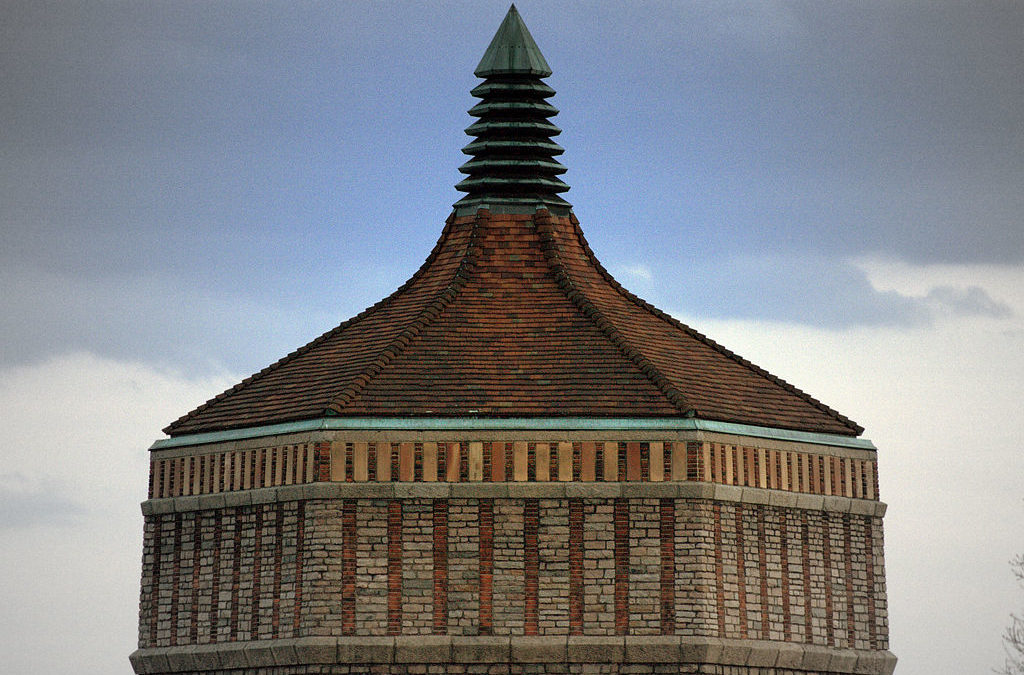 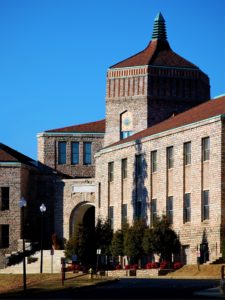 As construction of the new Asheville City Hall was nearing completion, in January of 1927, the Asheville City school board decided to appropriate $750,000 for construction of a new High School and accompanying Junior College, and they also voted unanimously to hire Douglas Ellington as the architect. The site chosen on what is now Asheland Avenue, consisted of “two large hills divided by a ravine”. (1) The high school was to be built on one hill, the junior college on the other hill, with the ravine being leveled for athletic fields. The Junior College ended up being delayed and though never built, it’s site eventually became the site for Asheville-Buncombe Technical College, the successor to the proposed Junior college. 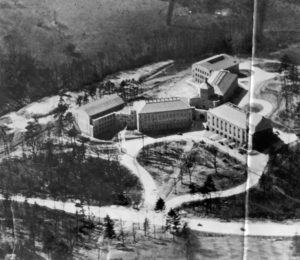 Douglas Ellington’s design for Asheville High School reveals his further progression from his Classical Beaux Arts training towards a Modern architectural style. I’ve been careful to use the word “Modern” rather than “Modernist”, as juxtaposed with the Modernists’ intentional modus operendi to reject any references to ancient or historical architecture, Ellington seemed to retain a healthy respect for the architecture of the past while producing “Modern” designs appropriate to his Age and Time. In a 1929 front page newspaper article, at the opening of the High School, Ellington gave us a brief insight into his design philosophy. The interviewer tells us that “he [Ellington] was able to begin open-mindedly with the particular requirements and the particular materials available, always remembering of course, that originally in design to be acceptable, must not be forced and not be merely a revolt against tradition, and that “above all things it must be honest, that is to say it must possess simplicity”. (2) The design for Asheville High School can easily be described by the word simplicity, as there is no ornate ornamentation, and even the colored materials used for the polychromatic masonry have a simple and quiet color range without any high-contrast differentiations. “The building radiates from the central entry tower into three equal wings, two for classrooms and the third for the auditorium. A gymnasium and vocational laboratory join at the southern ends. The classroom wings and attached structures nestle into the sloping contours allowing Ellington to establish a hierarchy of building masses without sacrificing the simplicity and order of the plan”. (3)

In his earlier designs for First Baptist Church and Asheville City Hall, Ellington used overt, though stylized, Classical motifs, but on the High School the Classical design references are basic and subtle. We see him transitioning into a Modern style, with what would become his own signature style, a blend of classical with art deco developing his own familiar motifs such as: round arches at the entry, prominent tower with domed or pyramidal roof topped with a lantern or cupola, use of local and natural materials, use of colored materials to achieve a distinctive color palette, and simple triangular aches over window or door openings.

Like his other designs for Asheville’s civic buildings, Ellington’s design for the high school borrowed motifs from architecture of the past, from different ages. The round arched openings at the entrance have their roots in ancient Roman architecture, the use of colored masonry to achieve a polychromatic color scheme is rooted in Venetian architecture, and the use of simple triangular arches for wall openings has its roots in ancient architecture of the Middle East. It also strikes me, that stacked windows with separating vertical spandrels and horizontal flat pilasters, used on the building’s wings is reminiscent of the work of the nineteenth-century Greek Revival architect, Alexander Jackson Davis. Even the central tower which looks like a modern design echoes the architecture of the ancient cultures of Meso-America.

The 1929 newspaper reporter who interviewed Ellington at the opening of the new school wrote: “The architect’s education, he [Ellington] believes, begins with the pattern, the acquirement of skill in design and goes on through all types of art. The true craftsman should be equally at home in designing a table, a cathedral or a commercial building.” (4) Although the building is successful, with its orchestrated blend of ancient and modern motifs, its brilliance can best be appreciated by looking at its individual details, which reveal Ellington as both architect and artist. Let’s take look. 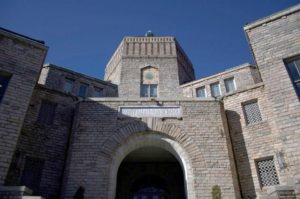 The building is entered through a layered round-arched opening into a front portico, which stands proud of the tower behind. The stone, as on most of the building is small in scale, and though dressed, is rustic in nature. Textural and color variation is achieved on the arch by using a smooth ashlar stone for the lining of the arch. The lettering in the stone-carved nameplate above the arch is in a gothic style, rather than art deco as one would expect. 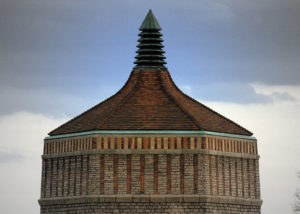 The most prominent detail is the central hexagonal tower. Like it’s Venetian counterparts, Ellington used polychromatic masonry on its implied architrave and cornice. However, instead of using marble to achieve the polychromy as the Venetians have done, Ellington used materials native to this area: stone, brick and clay tile. The polychromy of the masonry is achieved using colored stones with red brick for contrast. The tower is topped by pyramidal tiled roof which slopes up to a simple copper cupola. On the front of the tower, above the entrance portico is a creatively designed clock, above a central window, the whole ensemble being beneath one of Ellington’s signature triangular arches. The clock face uses colored stones and tile on its face. 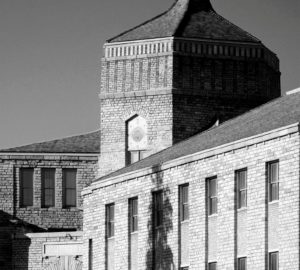 One of the most interesting details on the building, and one that permeates each part of the exterior, is Ellington’s use of differently sized and cut stones to achieve textural contrast, like the small paver stones in the window spandrels, the cut stones in the opening arches, and the large, long dressed stones which form the cornice round the top of the building. To make my point, I’m including a superb black and white photo (taken by a friend of mine) of a portion of the front façade, which illustrates Ellington’s use of differently sized and cut stone to create textural and tonal contrast. 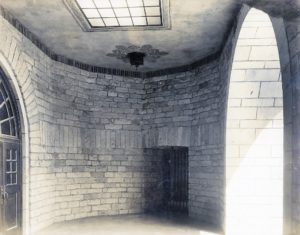 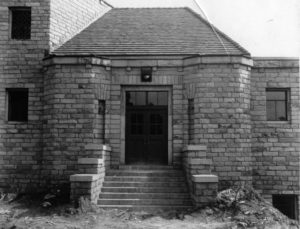 Another interesting detail is the use of flanking tower-like structures at the rear entrances to the building. These structures are shaped like castle towers, but are truncated at the roof line. Each also includes a light fixture recessed in a niche under a triangular arch. Perhaps these are to simulate gateposts, signifying the place of entry?

Just a mention of two interior spaces. The interior of the entrance portico is uniquely though simply detailed. The walls are roughly dressed stone with accent coming from differently sized stones which are used to create a band and arch at side entrances. A cornice is simply simulated with a row of soldier brick at the ceiling line. The plastered ceiling is colored and includes a skylighted center panel.

The interior entrance lobby featured different colored brick for the walls, hexagonal clay tiles for the flooring, and a plastered coffered ceiling. I can’t help but notice its similarity, yet contrast, to the High School at Milton Hersey School in Hershey, PA where I was raised. The Milton Hershey High School lobby, built in the 1930’s, also features angled walls, plastered ceiling, and has an Art Deco style. However, instead colored brick, the walls are covered in black and white marble, cut into layered geometric shapes, an overt Art Deco motif. Ellington’s genius is seen in how he was able to give the Asheville High School lobby the air of grandness, like the Milton Hershey lobby, yet using simple, almost rustic, masonry instead of polished marble.

The design of Asheville High School marks a transition in Ellington’s design strategy towards a Modern architectural style, which while borrowing and blending various architectural styles both ancient and Modern, begins to become a distinctive style all his own. Like nineteenth century Philadelphia architect Frank Furness (though not as eccentric), Ellington’s style became distinguished by the use of polychromatic masonry, and the blend of historic and Modern styles. Also, like Furness, Ellington’s style remained so unique and individualistic that it not only could not be categorized, but it was seldom mimicked and never became a specific architectural “Style” or Movement.