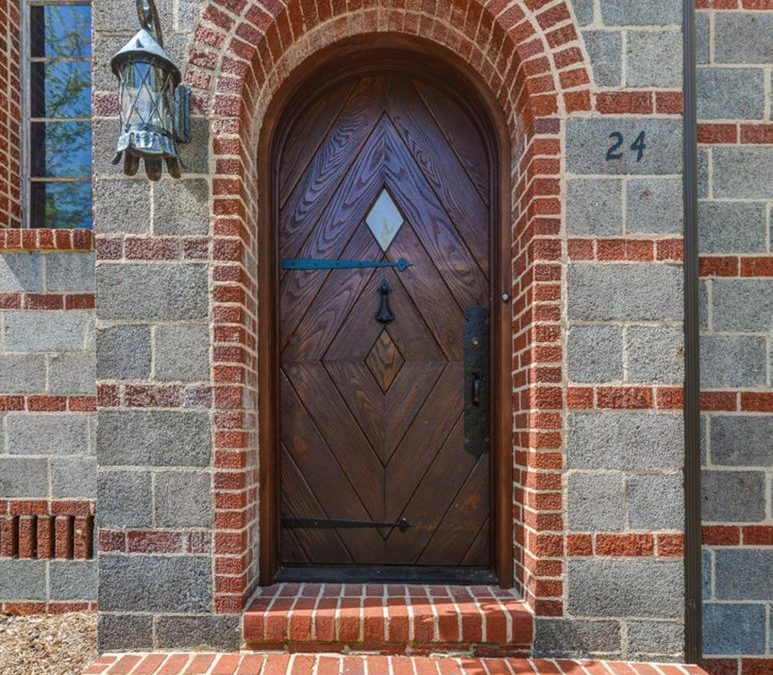 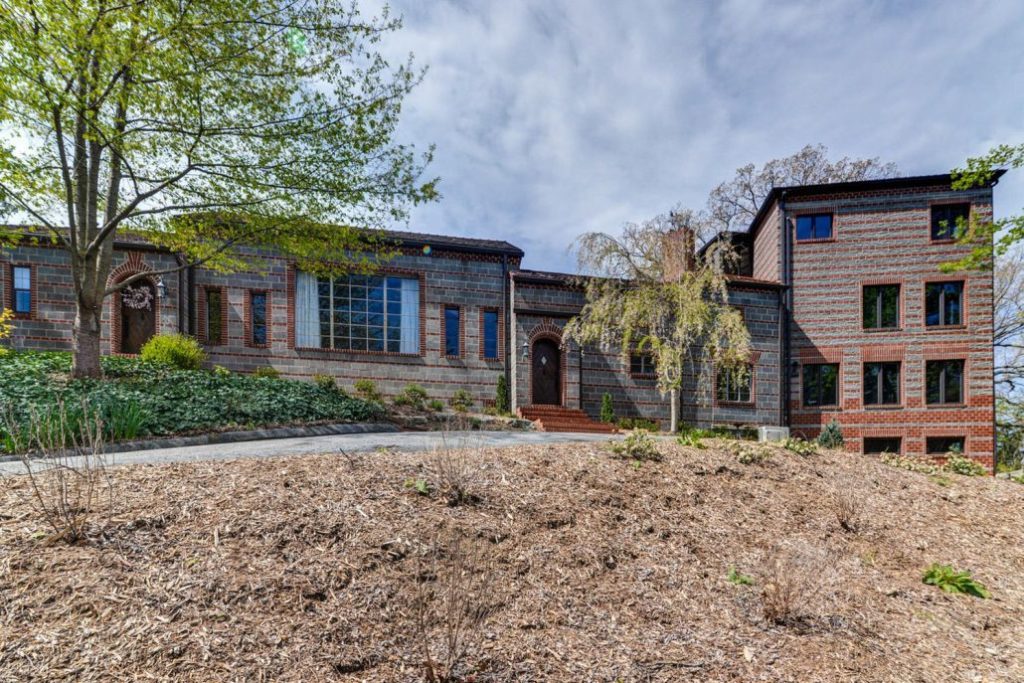 As quickly as success had come, just as quickly did it all come to an end. The Great Depression of the early 1930’s halted Asheville’s building boom, and architect Douglas Ellington found it necessary to move away to find work. He sold his Chunns Cove house to his sister-in-law, and moved to Washington, DC to work on a new “planned community” which was sponsored and promoted under a Federal program begun in 1932 by President Roosevelt

In 1937, Ellington relocated to Charleston, SC and opened an office at 5 Exchange Street. Although he never permanently resided in Asheville again, he did return to the mountains for visits and summers, and in fact took on numerous residential commissions in the Asheville area during the 1940’s and 50’s.  One such commission was a unique design for a modern concrete block castle! Ellington’s design strategy of blending Classic and Old-World traditions with modern design and materials came to full maturity in his design for Sanford & Rose Brown’s new residence called: Kells Castle. 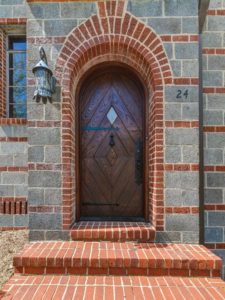 The house was constructed in 1949 on a residential lot in the stylish Kimberly Avenue neighborhood within sight of the Grove Park Inn.  “Rose Brown, an accomplished painter and designer, took the inspiration for the residence from the Book of Kells, which Ellington had loaned to her, and from the architecture of medieval Irish monasteries.   She reportedly challenged Ellington that he could not build her a house of cinder block that she would like.  Inspired by the challenge issued to him, Ellington constructed the house of exposed cinder block with brick accents and banding and covered with a red tile roof.”[1]

Ellington brilliantly transposed the typical unpainted stone masonry construction of medieval castles to unpainted concrete block with brick accents. Brick, in a running-bond, is used on every third course of masonry, separated by two courses of concrete block. Brick is further used to trim each window and door and is also used on stylized arches over the two round-headed entrance doors (front door and studio entrance).  The doors themselves also carry the castle theme with their fortified timber boarding (artistically installed a diamond pattern) and stout wrought-iron hinges. 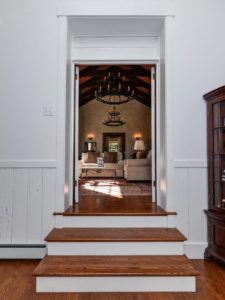 “Similar to the design of his own home in Chunns Cove, Ellington arranged the Brown House in a series of distinct volumes organized on a sloping site, with open terraces extending the living space into the outdoors.”[2] The original house was L-shaped, with the front façade (on the long side of the L) facing northeast. The large Great Hall living room was in the center flanked on the east by the entrance hall, kitchen, and bedrooms, and on the west by Rose Brown’s studio. The studio was accessed either from the separate exterior entrance door or from the end of the Great Hall. 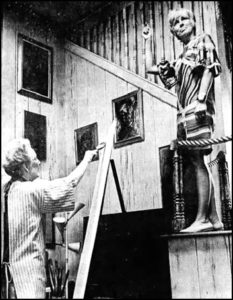 Rose Brown’s light-filled studio, was described by a 1950 visitor to Kells Castle: “A visit to Rose Brown’s new studio at 24 Kimberly Avenue revealed the sort of setting that should be an inspiration to any artist.  While some of the heaviest Mission style furniture had not been completed, the place already achieved an atmosphere of rare charm. It is one workshop that all Asheville artists will want to see, and it should be a great source of pride to Mrs. Brown.”  The house also served as an art gallery for Rose’s work- “Kells Studio and Gallery”.[3] 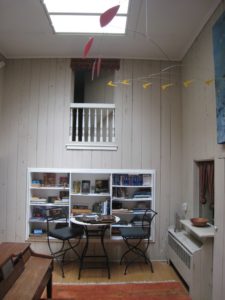 From the start the Browns played upon the house’s theme, not only on the exterior, but also on the interior design of the home, and even in their lifestyle, as evidenced by their hosting of a 1951 Asheville Music Club event.  The public was invited to the home to hear a small ensemble perform, according to a contemporary account, “early chamber music to tie in with the medieval atmosphere of the house which is based on the decoration on Ireland’s famous “Book of Kells”.”[4]  No doubt the event was held in the home’s living room, which was designed to resemble an ancient medieval Great Hall- the heart of every castle. Like every Great Hall, the large living room featured large glass and steel (instead of leaded-glass) windows, masonry and plastered walls, high arched ceiling with hefty wood roof trusses (simulating ancient timber-frame construction).  Two wrought-iron chandeliers (installed in the 1990’s by the home’s second owner) and an illuminated painted ceiling continues the theme.  Also, the living room walls were originally painted with a “mild gilt glaze to evoke the original designs” from the illuminated pages of the Book of Kells.[5] 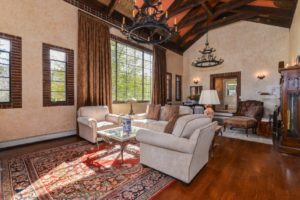 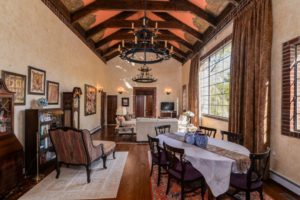 The home has undergone two major renovations in the recent two decades. In 2006, architect Patti Glazer designed a large four-level addition to the home on the west, which included a spiral stair in a connecting glass atrium providing access to a new sunroom, bedroom, studio and master suite. In 2014, the current owners Rick & Rebecca Crosson commissioned Patti Glazer to turn the residence into a two-family home to provide space for three generations of their family. Extensive remodeling which began in March 2014 was done by Andy Gardner and his team at Builtwright Construction and involved all rooms in the older portion of the home, all baths, kitchen, and the addition of a second full kitchen, air conditioning installation, and outside landscaping. The remodeling included interior design by designer Sandra Dykes and mural repairs by local artist Jim Mowitz, a who restored both the murals and plaster. Both the 2006 and 2014 restoration/rehabilitation projects were awarded Griffin Awards from the Preservation Society. 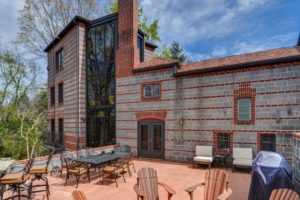 A Lesson learned for this architectural historian-not only am I amazed that a 1950’s unpainted cinder-block house could be so attractive, but that it has endured so for almost three-quarters of a century. Kells Castle is another architectural masterpiece reminding us of the creative genius that was, architect Douglas D. Ellington.

All photos (except those listed below) are used with corteous permission from Builtwright Construction Company, Winners of  a Preservation Society of Asheville and Buncombe County 2016 Griffin Award for their Rehabilitation of Kells Castle. All these, and additional photos, can be viewed on their website:

Kells Studio: from The Painted House blog, “24 Kimberly Avenue, Part I”, blog and photo by Angela Chrusciaki Blehm, who visited the home in 2010. http://www.tphblog.com/24-kimberly-avenue-part-i/