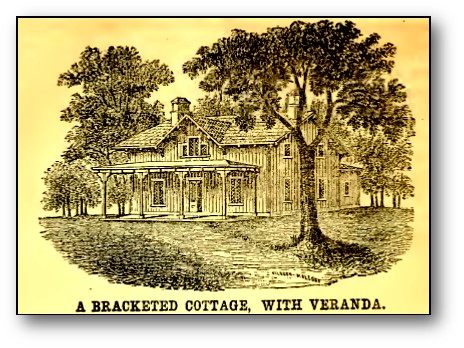 Landscape architect, Andrew Jackson Downing published Cottage Residences in 1842, and The Architecture of Country Houses, in 1850. In collaboration with architect Alexander Jackson Davis (who was the source for most of Downing’s designs) these publications became the premiere architectural pattern books of the mid-to late nineteenth-century, replacing the previous Georgian and Greek Revival pattern books. 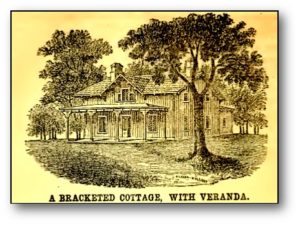 Last month we discussed Downing’s influence on the design of Ravenscroft (Joseph R. Osborne’s 1845 mansion in downtown Asheville), but this month I’d like to talk about what I believe to be Davis/Downing’s greatest impact on residential design in mid-nineteenth century Asheville and Buncombe County-that is “The Bracketed Cottage”.

We first see the “Bracketed Cottage, with Veranda”, as Design X in Downing’s The Architecture of Country Houses. Design XVI, “Bracketed Farm House of Wood”, in the same publication, also had the same characteristics, a one-and-a-half story cottage with a center gable above a second-floor central window and front veranda. However, both designs are less expensive and simpler versions of a previous design, “Design IV- An Ornamental Farm House”, in Downing’s earlier publication The Architecture of Country Houses. “This design motif appeared frequently in recommendations of Davis and Downing and greatly influenced vernacular residential design in North Carolina for more than 50 years after their initial distribution. Versions of this central-gabled, bracketed house eventually appeared in every corner of the state.”(1) Most of the houses that were built in our area, from or inspired by these two designs, also had a characteristic bay window (like on Design XVI) on one or both sides of the cottage. One major difference that I have found on the “Bracketed” cottages that were built in Western North Carolina is that they were not “bracketed”, rather instead of using the ornamental brackets shown on the soffits in the Davis/Downing design, most substituted decorative cut Verge Boards at their gables. Of course, the verge boards were also a Davis/Downing motif shown on many of their other cottage and villa designs. 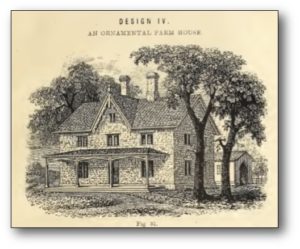 Downing passed away in 1852, and although his books were published in the 1840’s and 50’s prior to the Civil War, the examples of residences inspired by his designs and built in our area, were in fact mostly built after the Civil War. “The Civil War halted construction nearly everywhere in North Carolina, stopping work on some buildings before they were finished (2) and aborting plans for others. When building began again after long years of war, trends that had barely begun before the war took off rapidly.” (3)

Architectural historian, Catherine Bishir tells us that “the values and models espoused by Downing and his successors gained wide exposure in national agricultural journals and found their way into the North Carolina press. Such progressive periodicals as the Farmers Journal, the Arator, and the Carolina Cultivator ran plates and texts from Downing’s books[…]” (4). In fact, the illustration shown above of the “Bracketed Cottage” is from the May 1855 issue of the The Cultivator (published in Raleigh, NC). The page and a half article included this sketch, a floor plan, a description of the design and construction, as well as an estimate of its cost ($1,356). The author credited the design as coming from “Downing’s Country Residences”, published by “D. Appleton & Co., New York”. The anonymous editor states that “The importance of providing comfortable residences is, we fear, too little appreciated in the Southern States, particularly in the country. It seems the general opinion that a house which is ornamental, as well as comfortably arranged, costs much more than a house after the usual style, put up without reference to taste or convenience. This is a mistake. – A neat and pleasant country residence may be erected at about the same cost as the plain unsightly house…”. Well, I have no way of knowing if the editor’s claims were true, but I do know that the Davis/Downing’s designs were transformative for the building of “country residences” in Western North Carolina, as most farmhouses or “country residences” prior to that time were being built of log construction. 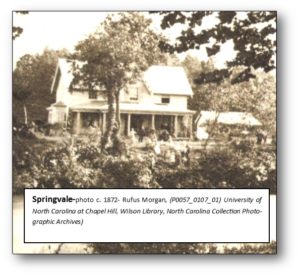 “Springvale”, a cottage built by John & Louisa Cheesborough, on the southern bank of the Swannanoa River about 3 miles southeast of Asheville, around 1867, was an example of a residence inspired by the “Bracketed Cottage”. A Rufus Morgan stereoscopic view, from around 1872, is the earliest known photo of the house that we have. We see from the photo that the house was clearly inspired by the Davis/Downing cottage idyll. Besides using the plan and motifs of Davis/Downing’s designs, the house exemplifies the ideals of the “picturesque cottage”, evoking romantic images of a cottage by the river, where the house and its surroundings “have a harmonious correspondence one with the other.” (5) I have found photos of two other houses that were clearly inspired by the “Bracketed Cottage” and built in our area. 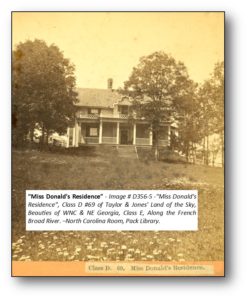 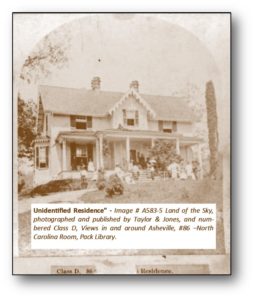 Unfortunately, I know little about either of these houses except for their photos. The first photo is of “Miss Donald’s Residence”, the second is unidentified, however, it is labeled as being from a series of “Views In and Around Asheville” by Taylor & Jones. Both houses are variants of the “Bracketed Cottage”, and have the characteristic one-and-a-half story cottage with a center gable above a second-floor central window and front veranda. They both have decorative verge boards at the gables, and both have bay windows on their sides. The veranda on these two houses as well as on “Springvale” are five bayed with the center three bays projecting forward about two feet. Miss Donald’s has the addition of a balustrade above the veranda. 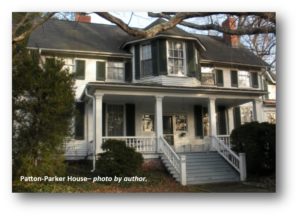 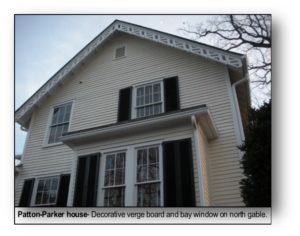 The Patton-Parker house at 95 Charlotte Street is an existing example of a house inspired by Downing’s “Bracketed Cottage”. Built in 1869 by Thomas Walton Patton, the house has the characteristics of a “Bracketed Cottage”: a one-and-a-half story cottage with a center gable above a second-floor central window and front veranda. However, the correlation is not so evident today, as the central gable had been removed during a late 19th/ early 20th century renovation and replaced with a projecting angled bay. The original center gable clearly shows on the 1891 Bird’s Eye View of Asheville. Also, the author has personally noticed the telltale marks in the front facia boards of the house that denote the location and existence of the original gable. The Patton-Parker house also has a side bay window and even an existing decorative verge board on its north side gable. 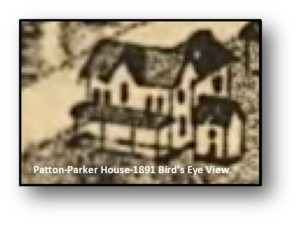 Although I’ve only found a handful of examples, I’m convinced that there were other houses built in Asheville and the surrounding area which were built from or inspired by Downing’s “Bracketed Cottage”.

(2) See a photo of the unfinished James Adolphus Gillespie house in Sandy Mush, which was never completed due to the intervention of the Civil War.